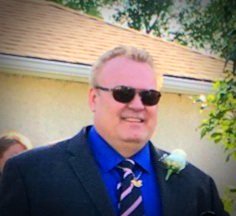 Gerald is survived by his wife of 39 years, Shereen, sons Bobby and David, grandchildren Lucas and Zalea, Mother Agatha, sisters Alma and Luella (Roy), brothers Gordon (Annie) and Wesley (Beverly), as well as many nieces, nephews, step siblings, in-laws, and friends that will miss him greatly.  Gerald was predeceased by his father Bill, step father Dave, niece Paige, and father in-law Deen.

Gerald was loved by all who he encountered.  With a huge heart and giving spirit, Gerald impacted the lives of many wherever he went.  Born in Winnipeg and raised in Steinbach until the age of 13, Gerald took his own path in life that led him around Western Canada until he returned home to Manitoba and met the love of his life, Shereen.  He was married at 20 and never looked back.  For 40 years he built a family, becoming an amazing husband, father, grandfather, uncle, and father figure to nieces, nephews, and anybody who needed one.  He became an instant member of his new family not only becoming like a second son, but a big brother to everyone.

Gerald was an extremely hard-working man with a special love for cars.  He spent his life in the automotive industry until finding a permanent home at New Flyer where he developed relationships all around North America over the last 22 years.  He often worked 2 jobs, not only to provide for his family, but to go above and beyond to make sure his family would never want or go without. Gerald was always his children’s and grandchildren's biggest cheerleader, the loudest voice on the sidelines, the rides to and from the games, and the coach when nobody else would step up.

Gerald was looked up to, admired, respected, and loved, and his loss will be felt not only through his family, but through the communities he was a part of.

To join us via livestream use the quick link on the left (or drop down menu on mobile) or utilize the link below:

Share Your Memory of
GERALD
Upload Your Memory View All Memories
Be the first to upload a memory!
Share A Memory
Plant a Tree