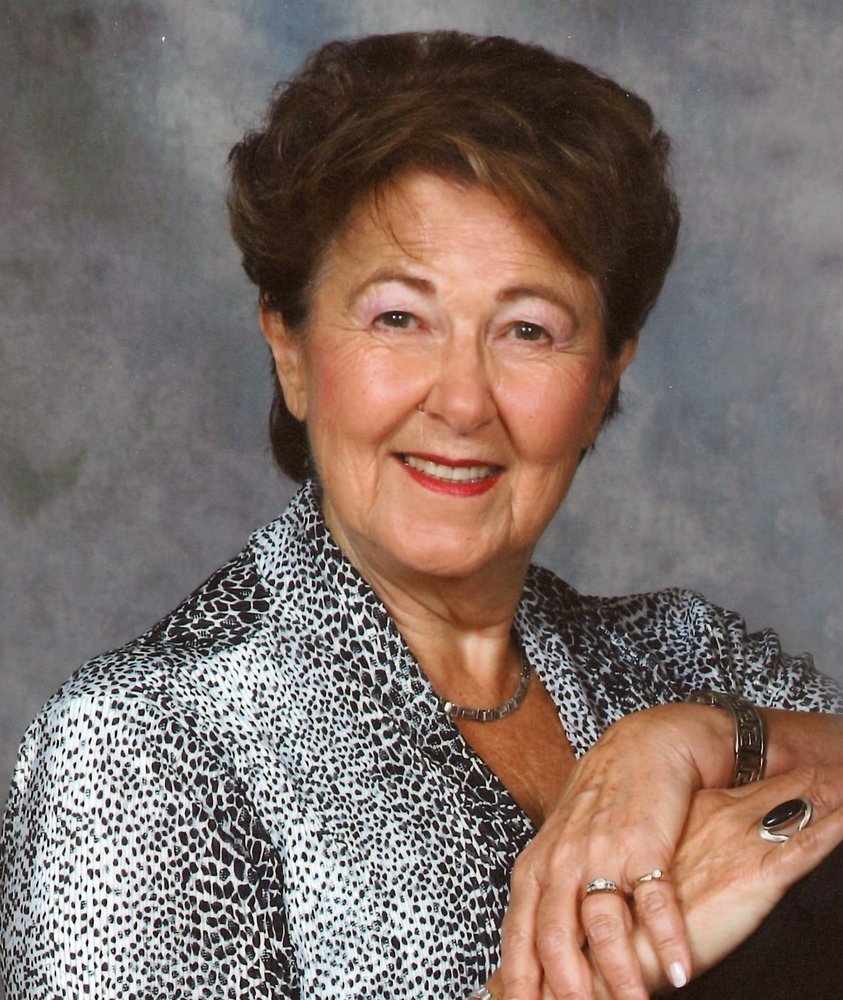 Peacefully, at home in her sleep, Ruby passed away after a fierce 4-year battle with cancer.

She was predeceased by her parents, Ed and Mary, infant sister Violet, and stillborn brother Edward.

Ruby was born at her family farm in Allegra, Manitoba.  She started her education at Bonner Law School, and this is where Ruby’s life-long love of learning began.  After finishing Grade 8, Ruby moved to Beausejour to attend High School, then Lorette to complete her Grade 12.  It was in Beausejour that Ruby met Lawrence, who would be the love of her life.

After a year of Normal School to become a teacher, Ruby began her teaching career at Brokenhead East School then Rattray School, both one-room school houses.

On July 18, 1959, Ruby and Lawrence were married and moved to Winnipeg, where Ruby would begin her long relationship with the Seven Oaks School Division, starting at Edmund Partridge High School, until she left to raise her girls.  She then taught Phys. Ed. for several years at St. Benedict’s Academy before returning to Seven Oaks at Centennial School, A. E. Wright, Ken Seaford, as a divisional Perceptual Motor Consultant, Elementary Resource Co-ordinator, and later Vice Principal of École Leila North, École Riverbend, then West St. Paul School.  She was an active member of the Seven Oaks Teachers’ Association (SOTA) as a Councilor and Executive Member for many years.

Ruby and Lawrence’s marriage was a model of love, respect, trust, and devotion.  They built a loving, joyful home for their girls.  Ruby nurtured her love of learning in her girls, then her grandchildren, and took pride in their achievements.  No assignment was too tough, and there was always time to give your best effort.  She impressed upon them that, with hard work and determination, they could achieve their goals.  Every outing was a Field Trip opportunity!

Ruby’s most cherished vocation would become that of Grandma.  She took on the role of fostering that love for learning to this next generation, helping them with daily homework, book reports, and whatever projects needed attention.  Everyone at Sun Valley School knew Quin’s/Brooklynne’s/Keanna’s Grandma.  She was a regular at sports practices and games, dance recitals, concerts, and all important events in their lives. She always made time to throw a football or play soccer in the back yard.

Ruby loved to travel and explore new places, and especially enjoyed sharing these adventures with her family.  During Christmas 1979, Ruby, Lawrence, the girls, and Ruby’s parents spent 2 weeks in Hawaii.  Seven years later, she organized a two-week, two-cruise exploration of Mexico and the Caribbean with the same six people plus Lawrence’s parents and Ruby’s Auntie Elsie.  After her retirement in 1998, Ruby and Lawrence tried to get away for a couple weeks every winter.  White sands, turquoise waters, palm trees, and all-inclusive resorts were the priority! But the most memorable of these family vacations was in March 2009, when Lawrence and Ruby took Shannon, Daryl, Alan, Quin, Brooklynne, and Keanna to the Mayan Riviera to celebrate their 50th Anniversary!

Ruby was an avid fan of the Winnipeg Blue Bombers, and was a Season Ticket holder from 1979 until she could no longer attend in 2017. How wonderful to see the team win the Grey Cup in 2019!  She attended shows at the Royal MTC regularly, and was a big fan of Folklorama for many years. Ruby loved her time at the cottage in Grand Beach, and made many life-long 4th Avenue friends.

From her difficult birth on, Ruby was a fighter.  In October 1991, she suffered a stroke which compromised her vocabulary and auditory processing.  She worked hard over the months that followed to re-input those words that were so precious to her.  Then in January 2017, Ruby was diagnosed with endometrial cancer.  After chemo and radiation in two different rounds over the following years, Ruby rallied and was ready for the fight again.  Sadly, in the last few months, she just got too tired to fight anymore.

People often comment of Ruby’s warmth, genuine interest in them, her supportive nature, and her smile.  She was respected by her peers, friends, and family.  She is missed by many.

Thank you to Ruby’s family doctor, Dr. Carrie Lafournaise, and the Gyne-Oncology & Radiation teams at Cancercare Units 1 & 3, and St. Boniface Cancercare. A special thank you as well to the nurses of the Palliative Care Program (Seven Oaks) and the ladies of Homecare who had begun to visit Mom recently.

Thank you to all the friends and family who have been checking in on Ruby over these last 4 years.  Your love, support, prayers, and visits meant so much to her.

We’ve lost a bright light in our family and our lives are a bit dimmer right now.  We know that, in time, our countless memories will shine to brighten our days again. We love you and miss you so much!

In lieu of flowers, donations would be gratefully appreciated to:

or a charity of your choice.

A mass to celebrate Ruby’s life will be held at 11:00 a.m. on Monday, February 22nd at St. Anthony of Padua Church located at 250 Burrin Ave., Father Dominic Yuen presiding. Viewing will begin at 10:00 a.m.  Due to COVID restrictions, we are unable to share this time with our family and friends, but please take a few minutes to say a prayer at this time. Interment at Holy Ghost Cemetery will follow immediately after Mass.

Share Your Memory of
RUBY
Upload Your Memory View All Memories
Be the first to upload a memory!
Share A Memory
Send Flowers