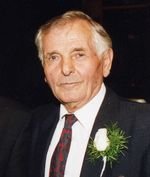 JOHN NICHOLIS CHOLAKIS September 25, 1922 - May 13, 2008 With great sadness we announce the peaceful passing of John &quot;Nick&quot; on May 13, 2008 at Grace Hospital at the age of 85. John is survived by his loving wife Garifalia &quot;Harriett&quot;; daughters Panagiota &quot;Bertha&quot;(Dimosthenis, &quot;Jim&quot;) Ganas and Angela (Ed) Forrest; grandchildren John (Vicki), Nancy (Stelios), Christopher and Jeffrey; great grandchildren Potoula, Lia, Stella and Alexandros; brothers Spiro, Peter and Leonidas; sisters Kontilo, Stavroula and Linda. He was predeceased by sister Anna. John was born in Varvitsa, Sparta, Greece and came to Canada in 1951. He looked after the Broadway Florist greenhouses in St. James from 1951 until 1963, when he ventured into the restaurant business, going from flowers to hamburgers, with the acquisition of Nick's Inn Restaurant in Headingley. After more than 40 years of hard work, becoming an institution in Headingley, &quot;Nick&quot; as he known by his customers, could be found wielding a coffee pot and a friendly greeting. John was a life member of the Greek Orthodox Church serving on the board for several years. Prayers will be said on Thursday, May 15 at 7:00 p.m. at St. Demetrios Greek Orthodox Church, 2255 Grant Avenue. A Funeral Service will be held on Friday, May 16 at 11:00 a.m. also at the Church. Interment to follow in Chapel Lawn Memorial Gardens. An online book of condolences may be signed at www.cropo.com. Pallbearers will be John Ganas, Christopher Forrest, Ernest Cholakis, John Sarantopoulos, Steve Mikos and John Danakas. Honorary Pallbearer will be John Karvelas. Pappou, we will always miss you. Cropo Funeral Chapel 586-8044

Share Your Memory of
John
Upload Your Memory View All Memories
Be the first to upload a memory!
Share A Memory
Send Flowers