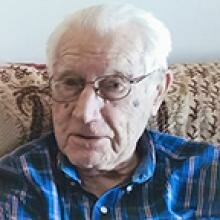 At the age of 103, Henry Gudz passed at Deer Lodge on Saturday, January 7.

Henry served in the Royal Canadian Air force from 1941-1945. He was stationed in Gander Newfoundland as part of the North Atlantic Squadron escorting ships across the Atlantic Ocean to England during the Second World War.

He spent his entire working career at Acklands (originally Ashdowns) until his retirement at age 65.

Henry was a proud "Northender" with many stories of escapades around Selkirk Ave., Redwood, bowling at Mosienko Lanes, his first "job" as a newspaper carrier, and meeting the love of his life Lydia.

In retirement years he was able to travel to many exotic places to escape our winters as well as trips to Australia, Hawaii, Germany and a number of cruises.

Henry was a very honest, gentle, caring man. He was truly "top of the line"! We will really miss him.

Share Your Memory of
HENRY
Upload Your Memory View All Memories
Be the first to upload a memory!
Share A Memory
Send Flowers
Plant a Tree