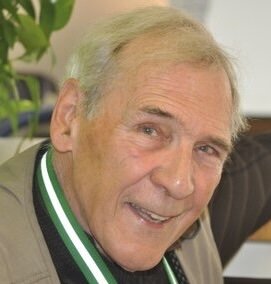 Our father passed away quietly at Seven Oaks Hospital on December 3, at approximately 6:00 a.m. Dad was a larger-than-life character with strong opinions on government, taxes, politics, books, writers and women (all favourite topics), and loved debating a worthy adversary, especially around the cocktail hour, when he would expound and argue over a cigar and sip of vodka.

Dad was genuinely interested in meeting people and could strike up a conversation with literally anyone, anywhere, at any time of day. Throughout his life, both friends and strangers would often comment on what an interesting and intelligent person he was to speak with. Like many men of his generation, Dad downplayed emotion with his close family, but we knew he loved us and was there for us.

Although John’s last few years were full of the troubles of ageing, he fought gamely through it all and raged against the dying of the light… We will miss him forever, and we know he is finally at peace.

Born in Winnipeg to Madeline and Jack Blackwood, John and his brother Bob grew up in Kenora, Winnipeg and Brandon. A graduate of Brandon University and University of Chicago, John served on the Board of Brandon University for many years. A proud Manitoban to the end, Dad was happiest when spending time at the family cottage in Clear Lake, Riding Mountain National Park. He was an avid golfer and tennis player, proudly boasting of his tennis prowess to anyone who would listen. Tennis was so key to his life that one summer at Clear Lake he convinced his first wife (Diane Blackwood) that he could not possibly wash dishes, as it would ruin his carefully cultivated tennis callouses.

John had a long and distinguished career in the Federal Public Service, and clearly loved his challenging work and the many interesting people he met along the way. Joining the Trade Commissioner Service in 1956, John served in the USA as Deputy Consul General in NYC and later as Consul General in Minneapolis, as well as at embassies and high commissions in Karachi, Tokyo, Caracas, Detroit and Washington, D.C.

John also served as Canada’s representative at the Inter-American Development Bank in Washington, D.C. Upon retirement from Federal Service, he joined the Manitoba Government as its “Ambassador to Ottawa,” holding court in his sizable office near Parliament Hill.

Dad passed away at 90 years of age. He is survived by his son, Harry (Victoria Taraska); daughters, Marjorie Blackwood (Peter Schelling) and Laura Blackwood; and grandsons, Ben and John Blackwood.

The family will hold a Celebration of Life for John Blackwood in his happy place, at Clear Lake, Manitoba, in the summer of 2023, time and date to be determined. Any who wish to attend are encouraged to contact daughter Marjorie at marjorieblackwood@msn.com for more details.

Family, friends and acquaintances are gratefully invited to share memories and thoughts of John Blackwood at www.cropo.com

In lieu of flowers, please donate to the Winnipeg Humane Society.

Share Your Memory of
JOHN DOUGLAS
Upload Your Memory View All Memories
Be the first to upload a memory!
Share A Memory
Send Flowers
Plant a Tree