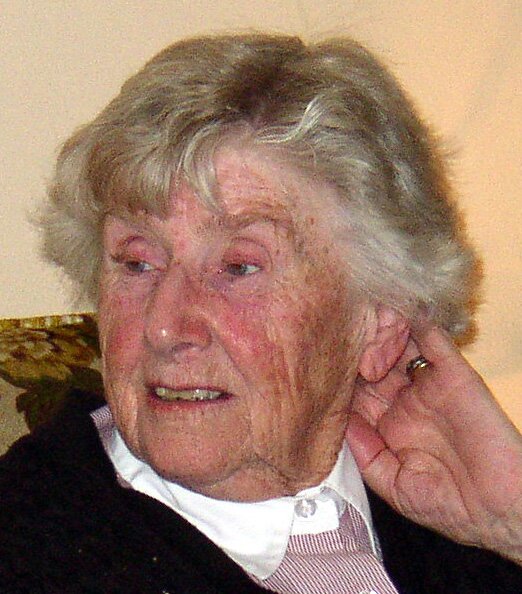 It is with great sadness the family of Agnes Josephine (Joey) WHITEHOUSE (nee DILLON) announce her passing on December 1, 2022 at Seven Oaks Hospital, Winnipeg at the age of 98 years.

Mom was known to friends and colleagues as Joey.     She was the 4th of 8 children and she would continually remind us that all her sisters with 2 names went by their second name but for some reason not her.    She didn’t like that and try as she may the family would not change and she would always be known as Agnes.

Mom was born February 2, 1924 in Liverpool, England to Irish parents.   Her family moved to Port Sunlight where her father worked for Lever Brothers until he died in 1939.    They lived at The Ginnell a place she loved and often spoke about.    At 16 she left school to work for Lever Brothers as a clerk.  In 1943 at age 19 she joined the Women’s Royal Naval Service (WRENS) as a clerk in the Master of Arms Office for the duration of the war, serving in Scotland, Ceylon, Sri Lanka and India.     Mom was proud that she was one of the first drafts of WRENS to be sent to serve overseas.

Mom met Dad, while both were in the service, and on return to England they married in 1947.   Dad left England for Canada in June 1955 to find a job and get settled, with Mom following later with their 3 young children aboard the S.S. Invernia leaving Liverpool in November 9 of the same year arriving 5 days later in Montreal.    From there off the family went to their new life in Shoal Lake, Manitoba.    A bit of a shock for the Liverpool lass until about 6 months later when she was on the move again to Winnipeg renting on Lansdowne Ave. and McGregor St., before purchasing their first home on Peony Ave in Garden City, which is where she lived for 57 years.

Mom went back to work in 1961 taking a job in a personnel department with the Federal Government in 1962.    She worked her way up the ranks within personnel until her retirement from the Correctional Service of Canada as Assistant Warden Personnel at Stony Mountain Institution in 1983.

Mom always kept her naval roots being an active member of the Ex Wrens Association and the Naval Officers Association of Canada.    In 2011 she was given the Bronze Award for her outstanding contribution to the NOAC.   In 2012 she was awarded the Queen Elizabeth II Diamond Jubilee Medal in recognition of her contributions to Canada.

Dad passed in 1992, which was extremely difficult for Mom as they always travelled and did things together.    In the summers you would find them at Lake of the Woods fishing or playing cards with friends and she continued to do that after Dad passed.    She remained active and independent for many years attending the wellness clinic or doing mall walks.    She would often be found doing needlework, knitting, solving crosswords or her favourite sudoku.    She loved to travel and did road trips with friends across Canada and the U.S.    She often went back to England to visit her siblings, neices and nephews.

Agnes or Joey (however you knew her) was a kind and generous person who always tried to deal with people fairly.    She was loved by many and liked by everyone she met.    She was predeceased by her husband of 45 years, Frederick Arthur (Fred) Whitehouse and survived by her children Trevor (Helen), Janet (Brad) and David (Loraine), as well as her granchildren Kevin (Carol), Colin (Nathalie), Ben (Jolene), Dillon (Betsy) and Chris as well as 6 great grandchildren.   Special mention to Jim who for so many years was always there for her if she needed anything done around the house.

The family has decided there will be a private scattering of ashes at a later date.    If friends so desire a donation may be made in Joey’s name to a charity of their choice.

Share Your Memory of
AGNES
Upload Your Memory View All Memories
Be the first to upload a memory!
Share A Memory
Send Flowers
Plant a Tree