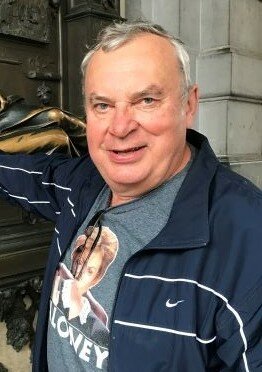 Peacefully, on October 31, 2022, Michael Shewel passed away at Riverview Health Centre in Winnipeg, Manitoba.  He was predeceased by his parents Alex and Anna Shewel. Michael was born on September 23, 1945 in a refugee camp in the German village of Schwabisch-Gmund.  In the last 2 years of the war, his parents worked in a German labour camp. When he was about 2 years old, the family was transferred further north to another refugee camp in the village of Mittenwald and in July, 1949 they immigrated to Winnipeg.

Michael married Sharon Staats in 1965. She worked and supported them while he completed his science degree at the University of Manitoba in 1967.  Accompanied by his wife, Michael continued his education in the field of Meteorology in Toronto, Ottawa, and Trenton. His work took him to many places in Canada: Winnipeg, Saskatoon, Gander, Churchill, Edmonton, and Resolute. He retired in 2005. Over the course of his career, Michael and Sharon took trips to Fiji, Hawaii, Europe, China and Greece. They took their children to Disneyland, and often went camping.  Michael enjoyed playing snooker with his younger son Chris. and floor hockey and cribbage with his older son Mark. He loved attending his daughter’s romantic wedding in Maui, and enjoyed visiting his grandchildren and taking them his homemade soup. Sharon and Michael parted ways in 2009. He met Heather Lytwyn in 2010, and they were married in 2011. They enjoyed travelling and took four cruises in the Caribbean, one in Australia and New Zealand, one in northern Europe and one in the Greek Islands. They also visited London, Belgium, Amsterdam, Paris, Las Vegas and made road trips to Flin Flon, Swift Current, Saskatoon, Shoal Lake, and the South Dakota Badlands.

Mike will be remembered as a great story teller, with a sense of humour and kind heart, who could talk to anyone about anything. He had many friends and relatives who thought of him as a brother. His intelligence caused others to seek out his advice.  You could always count on him to tell you the truth as he saw it. He loved to entertain, was an excellent cook, and as soon as he invited anyone over for a meal, he immediately started planning the menu. He enjoyed the camaraderie in his profession as a meteorologist, and loved to travel.  He enjoyed playing games, reading, watching Netflix, and was a fan of the Bombers and the Jets. He was a generous man who gave to charities all of his life, and could not resist clearing out his neighbours’ driveways with his snow blower.  He was a man of many skills: from fixing cars with his father-in-law Lester, carpentry projects with his father Alex, and painting with his cousin Paul.

In lieu of flowers, donations could be made in Michael’s memory to Siloam Mission or a charity of your choice.

The funeral will be held at Cropo Funeral Chapel, 1442 Main St. on Thursday, November 24 at 11:00 a.m. Interment will take place at Glen Eden Memorial Gardens in West St. Paul.

Share Your Memory of
MICHAEL
Upload Your Memory View All Memories
Be the first to upload a memory!
Share A Memory
Send Flowers
Plant a Tree