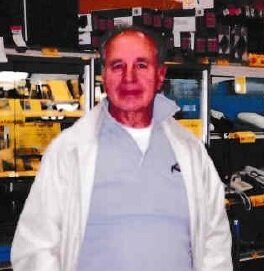 It is with deep sorrow that we announce the passing of Frank Miziolek at the Holy Family Home on June 17, 2022 at the age of 97.

Frank was predeceased by his loving wife Violet, brother, Joseph (in Edmonton), and his grandson-in-law, Marvin Johnson in Calgary.

Frank was born in Szwajkowce, Poland. After some living in Poland his family immigrated to Canada in Winnipeg. This is where he met the ‘Love of his Life’, Violet.  They raised a family of 2 children, and the rest is history.

Frank was the type of man who would help anyone at any time; no matter what. He loved going to the race track; playing poker, telling jokes and stories and also fixing cars (his and others).

A private service was held by the family.

The family would like to thank the staff at Holy Family on floor 3A. Also, many thanks to pallbearers David Chomiak, Gerry Bonham, Kyle Lischka, Howard Cramer and Ian Cramer.

In lieu of flowers, donations may be made in Frank’s memory to the charity of one’s choice.

A celebration of life is to be held at a later date.