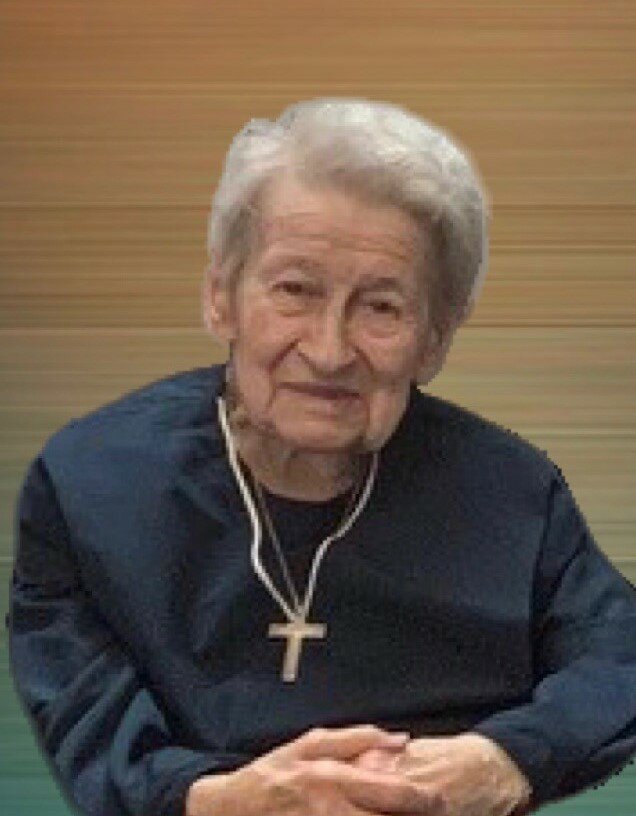 Sr. Elicia Telenko passed away peacefully May 20, 2022, at Bethany Home in Winnipeg, Manitoba, at 91 years of age and 73 years in religious life.
Anne was born on November 22, 1930. Her parents, John and Katherine (nee Rakobowchuk), had immigrated from Ukraine and married in Montreal, QC. She was the youngest of eleven children.
Anne’s parents were often at the home of the Sisters Servants of Mary Immaculate and would take Anne with them. She later recalled how prayerful and hospitable the Sisters were. At three years old, she already wanted to be a Sister.

Then Anne entered the Novitiate in Ancaster, ON. In 1948 she took the religious name, Sister Elicia.

The Sisters recognized her gift for teaching. Her first teaching missions after vows were in New York and Ohio. She also taught in Yorkton, SK before beginning Teachers’ College in Toronto. Classroom teaching was her mission for thirty years in Ontario, Quebec, Alberta and Manitoba. She was school principal in Toronto, Oshawa and Montreal. She also taught summer catechism throughout the prairie provinces and in Ontario. Due to health issues, she paused to convalesce, resuming teaching later with lighter duties.

For the next half of her ministerial life, she did parish work, pastoral visiting and catechetics. While stationed in New Westminster, BC the Bishop requested that a mission be opened in Prince George to which Sister Elicia was assigned. She was later engaged in catechetics and Children of Mary in Alberta, Saskatchewan and Dauphin, MB where she also led the SSMI Associates. In Dauphin she was sacristan, retreat director and pastoral care worker at St. Paul’s Home and other institutions.

She earned a BA in Theology from Concordia University in Montreal. She studied facilitation, an asset in sessions with parents, lay catechists and SSMI Associates. She also took a course in Hospice and Palliative Care.

Sister Elicia was very close with her family and her holidays were often spent with them. She assisted during her mother’s last year of life and was always available to help her relatives.

For Sister Marianne’s Golden Jubilee, both Sisters were treated to a family Caribbean cruise by her nieces and nephews. Sister Elicia also went to the Holy Land and Lourdes, France, sponsored and accompanied by Rev. Deacon Michael Bozio and Family. Sister Elicia encouraged the Bozio family to pray, through the intercession of Blessed Josaphata, for the safe delivery of grandson Markian, and this great grace was received.

Sister Elicia struggled with her health throughout her life. In 2008, her reduced mobility led to retirement at Bethany Home in Winnipeg. Her ministerial focus then became intercessory prayer.

Sister Elicia was predeceased by her parents John and Katherine, brothers Taras, Steven, Theodore, Peter, Michael and Philip, and sisters Catherine, Sister Marianne, Mary and Rose. She leaves to mourn numerous nieces and nephews, and her Sisters in the SSMI community. Gratitude goes to her dedicated caregivers.

Parastas is at 6pm June 1, and funeral 10am June 2 at Bethany Home, 131 Aberdeen Avenue, Winnipeg.

A Memorial Tree was planted for SR. ELICIA
We are deeply sorry for your loss ~ the staff at 1442 Main Street
Join in honoring their life - plant a memorial tree

Share Your Memory of
SR. ELICIA
Upload Your Memory View All Memories
Be the first to upload a memory!
Share A Memory
Send Flowers
Plant a Tree