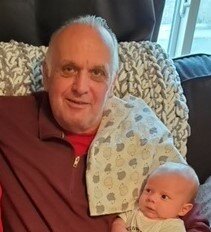 Tom’s family is sad to announce his quiet (sudden) death at his residence.

Tom was born to Olive (Hannesson) and John Topp and raised in Winnipeg.  In his youth, he was active in many sports, especially hockey and lacrosse and played on the Manitoba team in 1970 at the first national tournament for young lacrosse players.  He graduated from Transcona Collegiate Institute in 1976.   He worked in the Winnipeg area for several years before moving to Calgary where he began his career in the insurance industry and earned his FCIP.  Tom continued to work in insurance after returning to Winnipeg in the early 2000s and was the Assistant Vice-President of Marketing at Marsh Canada Limited at the time of his death.

Tom enjoyed a good game of golf, blues music, and jokes.  He could rock a tuxedo, faded jeans or sweat pants.  He was an adventurous cook and BBQ master.  He played a bit of pick-up seniors hockey and coached his son Bryan’s peewee hockey team during his years in Calgary.  Tom was a good man and worked hard and we will miss him.

Tom is survived by his much loved son Bryan and Bryan’s partner Emma and their baby boy Kaden in Calgary.  Tom was proud to have become a granddad/afi. He is also survived by his sister Karen and her husband Dan Walker in Victoria and his nephew John Walker and partner Krista and his niece Katharine Walker and partner Mitch Ginter and new great niece Hannah Ginter, all in BC, as well as many cousins and friends in Manitoba and farther afield.

A Memorial service is planned for the summer of 2022

Flowers gratefully declined.  If friends so desire, donations to a charity of one’s choice would be greatly appreciated.

Share Your Memory of
THOMAS
Upload Your Memory View All Memories
Be the first to upload a memory!
Share A Memory
Send Flowers
Plant a Tree