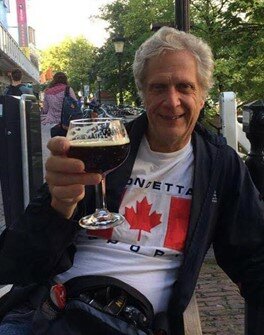 It is with great sadness we announce the passing of Robert (Bob) John Beitz on March 26, 2022 at home surrounded by the love of his family.

He was born in Winnipeg on August 10, 1951, where he met and married Beverley Deamal on May 4, 1974. They had four beautiful children which were his pride and joy. The oldest, Michael, passed away suddenly at the age of 12 in 1987. His oldest daughter Richelle and her family usually live in Melbourne, Australia. His younger daughters reside in Winnipeg.

Bob wanted his children to be self-sufficient.  He made sure they knew the basics in life such as changing a tire and fixing things around the house.  He encouraged them to work with him on his many projects and helped guide them through any projects of their own.

In 1984, Bob and Bev purchased a plot of land on an island in Lake of the Woods. From then on they could be found there every weekend from May to October where Bob always had numerous projects on the go.

Bob was mechanically inclined, in his senior high school years he took industrial electrical with the goal of becoming a licensed electrician. In 1974, Bob was hired into a railway apprenticeship and by 1980 had acquired his inter-provincial electrical license (later called red seal) as well as a contractor license. Although he could never see himself sitting behind a desk he later was happy to move into management as a maintenance supervisor. Bob later moved from maintenance to manufacturing, where he held positions including floor supervisor, planner and shop manager.

At the suggestion of one of his managers he joined the Canadian Institute of Management (CIM) where he once again excelled in his courses at the University of Manitoba and graduated in 1999 with a four year Certificate in Management and Administration. This helped Bob survive a number of downsizing and restructuring phases at work. Bob made many friends in his years at the railroad and through his involvement in CIM.

In 2009, 35 years to the day from his first day as an apprentice, Bob retired from the railroad industries. In his retirement Bob continued to enjoy his passions of traveling, home renovations and spending time at their property on Lake of the Woods. Usually with a minimum of two projects on the go.

Bob had a gift for working with his hands. Starting in the early hours of the morning, usually with a whistle and jaunt in his step, he could be heard working on his latest project, from renovating the house, to making homemade perogies, to working with stained glass; if he didn’t know how to do it he learned. Equally, Bob enjoyed “Happy Hours” taking time to sit, have a laugh and “shoot the breeze” with his family and friends.

Bob was known for his mischievous nature, quick wit and his kind and compassionate spirit.

He will be remembered by his wife, Bev Beitz; his daughters Richelle (Tom) Dorinko, Samantha Beitz, and Shauntel Beitz; his mother Elsie Beitz; his three grandchildren; his sisters Pat (John) Mclaughlin and Judy (Glen) Washington; his nieces and nephews, as well as, numerous extended family and friends.

Bob was preceded in death by his father Jacob and his son Michael.