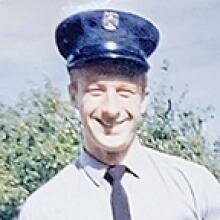 Peacefully, after a lengthy illness, it is with deep regret that we announce the passing of Donald Robert Ochocki on February 16, 2022, at Deer Lodge. He was 81.

Winnipeg was his residence for all his life. He is survived by his beloved wife Genivieve (nee Michniuk) of 55 years, his son Russell and his daughter Robin (Rodney). He enjoyed a special bond with his sister Darlene (Larry) and his nieces, Dana (Andrew) and Darcy (Roger). He was predeceased by his parents, John and Jean.

He was a graduate of Tec-Voc High School, where he was part of the football team that won the city championship in the late 1950s. Donald enjoyed playing football and later in life watching his beloved Blue Bombers.

He also enjoyed organizing and planning many family vacations including trips to BC, Florida, Hawaii, and Toronto.

He entered the Winnipeg Fire Department on September 1, 1965 and retired October 22, 2000 as Captain with 35 years of service. Other jobs included working at Advance, many small TV shops, and the DEW Line in the Northwest Territories.

Our family thanks the staff at Deer Lodge Centre 4W who took care of Donald in his final months.

Funeral service will be at Cropo Funeral Chapel, 1442 Main St. on February 26 at 1:00 p.m. and will be open to all fully vaccinated family and friends who are willing to provide proof of vaccination.

Private cemetery service to take place at a later date.

Share Your Memory of
DONALD ROBERT
Upload Your Memory View All Memories
Be the first to upload a memory!
Share A Memory
Send Flowers
Plant a Tree