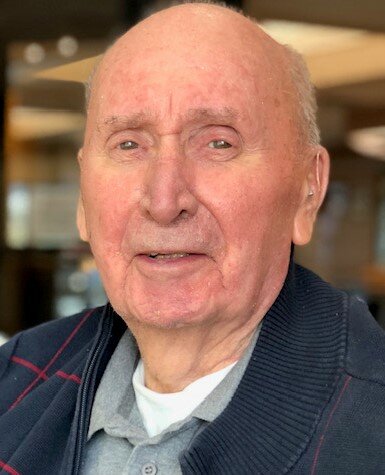 Peacefully on February 6, 2022, at the age of 90, Ron Probetts peacefully passed away with his son Bruce and daughter Tannis by his side at Bethania Personal Care Home.

Ron joined the Navy and was stationed in Comox BC and went into the Korean War and was on the Cayuga Destroyer 1953-1954.  Over the years dad developed a passion for travel which led him to a career in the travel business and owning Atlas Lance Travel which consisted of 5 offices.

The family would like to thank certain special nurses, aides, recreational staff of Bethania Personal Care Home who took special care of our father….you know who you all are.

As per dad’s wishes, cremation has taken place.  A private family celebration of dad’s life will happen later in the summer.   In lieu of flowers, donations can be made to the Alzheimer’s Association or a local dog rescue of your choice.

OUR FAMILY URGES EVERYONE WHO HAS A LOVED ONE IN A PERSONAL CARE HOME TO BE AN ADVOCATE FOR THEM AND VISIT OFTEN.  TOO MUCH NEGLECT GOES UNSEEN AND OUR PROVINCIAL GOVERNMENT AND HEALTH AUTHORITIES NEED TO ADDRESS THE UNDERSTAFFING CRISIS IN HOME CARES AND PROVIDE IMMEDIATE SUPPORT TO NURSES AND HEALTH CARE AIDES.