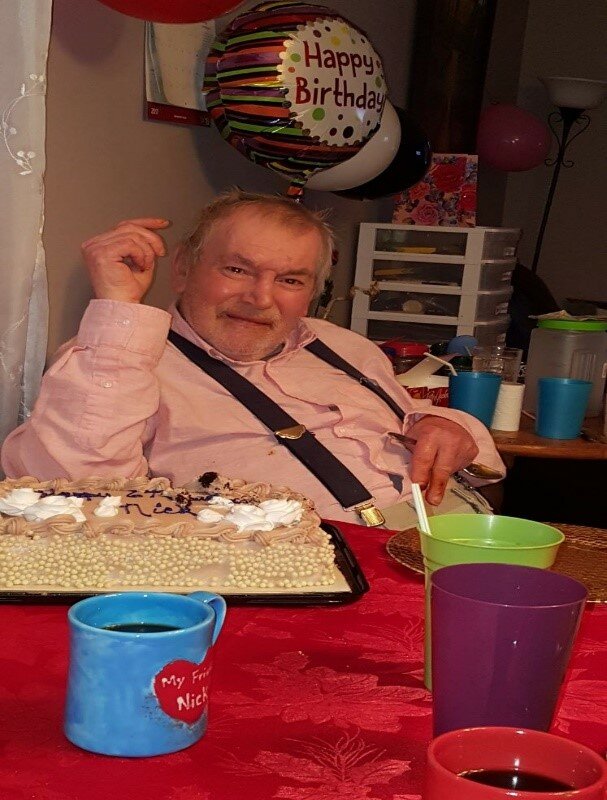 With heavy hearts, we announce that Nicholas passed away on January 28, 2022, in the St. Boniface Hospital, at the age of 71 years.

He is survived by his roommates, Gerald Choptiany and Arlene Bittern; special friends, Corey from Brandon, and Shannon Harley and Regina Robinson from Winnipeg; all the staff who worked with and knew him from his VOI family; and his brother, Herman, and sisters, Hannah and Joanne.

Nick was born in Germany. As a child, he moved with his parents and siblings to a farm in Manitoba. In his teen years, he moved to the MDC, residing there until 2007, when he moved to Winnipeg with his VOI family on Keenleyside, Henderson Highway, and then, lastly, 171 Barrington. His mom, Laura, was very important to him, and he would visit her as often as he could until she passed away in 2019.

Nick was strong, independent, and known for his legendary grudges. He could hold a grudge for so long that he would forget what he was mad at you for! Nick enjoyed going on trips to find the perfect burger and coffee; listening to Polka music; playing cards (as long as you didn’t brag if you won); collecting candles, lighters, containers, and wooden puzzles; rolling cigarettes; and buying scratch tickets. He loved going to the mall, convenience stores, and Dollarama to window shop.

When they could not visit each other, Nick regularly called his long-time friend, Corey, whom he knew for 30 years, since the days in which they lived together in MDC. Nick shared a special bond with Regina Robinson and had a close relationship with Shannon Harley, whom he called often.

We will hold a celebration of Nick’s life at 1:00 p.m. on Thursday, February 10th at 1442 Main Street at the Cropo Funeral Chapel. Internment will follow at Chapel Lawn Memorial Gardens.

Share Your Memory of
NICHOLAS
Upload Your Memory View All Memories
Be the first to upload a memory!
Share A Memory
Send Flowers
Plant a Tree