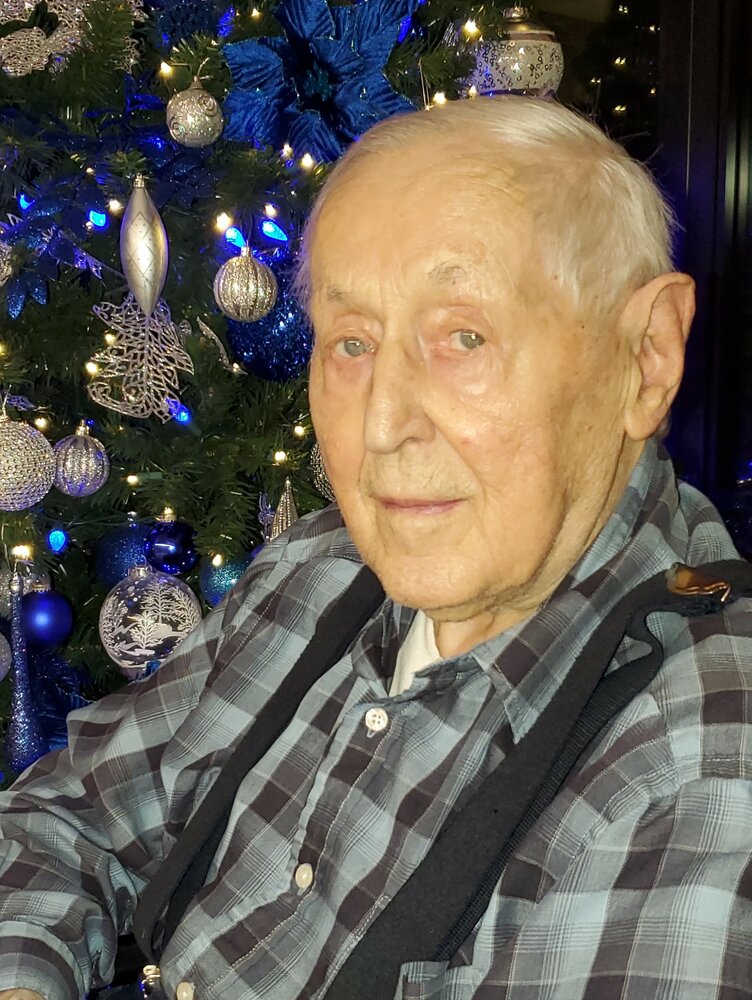 With sorrow we announce Dad’s sudden, but peaceful, passing at HSC.

William, son of Ivan and Katherine (nee Kudryk), was the youngest of five siblings, Olga, Nestor, Anastasia, and Sophia.

William was predeceased by his wife Vera (nee Zaretski) of 57 years in October 2005.

A private family funeral will be held at St. Mary the Protectress Orthodox Cathedral on Thursday, January 20, 2022 at 10:00 a.m. with interment to follow at Senkiw Orthodox Cemetery (Roseau River Community). A livestream will be available at www.cropo.com.

In lieu of flowers, donations can be made to St. Mary The Protectress Cathedral, c/o Orysia Koster,  20 Aster Avenue, Winnipeg, MB  R2V 2K9 or online at stmarytheprotectress.ca

William (Vasyl / Bill) was born on February 2, 1925 on the farm in Tolstoi MB to parents Ivan Kowalchuk and Katerine (nee Kudryk).

Vasyl was the youngest of five siblings, Olga, Nestor, Anastasia, and Sophia.

After completing Grade 12, Vasyl stayed working on the farm until 1943 (at age 18) when he was called to serve in the Armed Forces, but his enrolment was officially “postponed till further notice” as he had to stay to help on the farm.

In 1945 William earned a “Teaching Permit” by enrolling in a 5-week course at United College in Winnipeg.

He returned to Southern Manitoba and promptly got a 1-year teaching position at the one room River Ranch School in Rosa, MB.

Returned to attend Normal School in Winnipeg for a year to get a “Teaching Certificate”.

From 1947 to 1958 he continued his teaching career at Rosa-Senkiw School, Beckett School, Carlowrie School and Sarto School (one room schools) in Southern Manitoba.

During this teaching stint he met Vera Zaretski from Carlowrie and they were married on June 28, 1948.

They moved to Winnipeg in 1958 and William took a 2-year position as a Teacher / Principal at the two story-two room Wentworth School just west of Winnipeg in the Rosser Municipality School Division.

From 1960 to 1984 William taught in the Winnipeg #1 School Division at Robertson, Lansdowne and Garden Grove Schools and officially retired in 1984.

-Serving on the Manitoba Curriculum Committees for teaching Ukrainian in Manitoba Elementary Schools and travelling across Canada to introduce these teaching methods to other teachers.

Activities that kept William busy during his teaching career and afterwards.

-Serving on the Sobor Church Executive for 40 years

-Working with the Millennium Villa Building Committee and fundraising Bingos

- Recording Secretary for the Brotherhood of St, Andrew

-Member of Ukrainian Orthodox churches of St. Peter and Paul in Rosa and The Nativity of St. Mary in Senkiw where he is still a member.

-A cottage build and its continuous improvements over the years in Carlowrie near Vera’s parents original homestead.

William was a talented self-taught musician able to play violin, piano or organ and harmonica, without using any musical notes, which he never did learn as he could listen to a piece of music and could play it “by ear”.

After Vera passed away William stayed in their home on Atlantic Ave for 7 months before moving to the Church Villa.

William lived at the Villa till October 2020 after which he went to Amber Meadow Assisted Living residence. He was a resident at Holy Family Nursing Home for the last few months before his passing.

A “Bucket List” item that Bill never got a chance to fulfill was a hot air balloon ride over Winnipeg. And why not? He could not convince someone brave enough to go with him!

William led a healthy and active life for almost 97 years. His teaching career undoubtedly profoundly influenced thousands of young boys and girls as well his children and associates to help them become well educated individuals.

We would like to thank the many Home Care Workers who helped William while he lived at both the Villa and Amber Meadow. Also a heart felt thank you to the Medical care he received at Victoria Hospital prior to his move to Holy Family Home and the care he received at Health Science Centre just prior to his passing. The staff at Holy Family provided great loving care during his short time there.

In lieu of flowers, donations may be made to St. Mary The Protectress Cathedral, c/o Orysia Koster, 20 Aster Avenue, Winnipeg, MB,  R2V 2K9 or online at www.stmarytheprotectress.ca.

Share Your Memory of
WILLIAM (BILL)
Upload Your Memory View All Memories
Be the first to upload a memory!
Share A Memory
Send Flowers
Plant a Tree