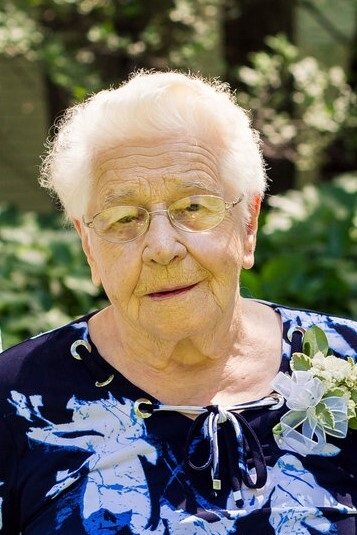 Olga Pawlychyn was born in 1918 in Chatfield Manitoba to Samuel and Katyryna Tataryn as a first-generation Canadian Ukrainian. She had two brothers (Mike and John) but she was the risk taker and dare devil of the family showing no fear as a young girl.  Olga attended Fish Lake School in the Interlake where she enjoyed learning until approximately grade 6.

Olga married John Pawlychyn in 1939 in Chatfield Manitoba, the couple welcomed three children over the years, Fred and Steve were born on the farm but Sonya the youngest was born in the City of Winnipeg.  Over the years Olga raised the children, maintained the homestead and added to the family income where she could with odd jobs including gathering Seneca roots. In early 1954 the family moved to Winnipeg to take on life in the city.

Olga loved socializing, singing with Ukrainian choirs, playing bingo, going to the casino, playing cards, reading, and travelling when given the opportunity.  Olga was an active member of many Winnipeg Ukrainian organizations including the Ukrainian Labour Temple and women’s groups.  In her final few decades Olga lived at Ivan Franko Manor where she worked as a caretaker of the Ukrainian Labour Temple event hall and was the local bingo caller.  As well as preparing the hall for events, Baba taught aquafit in the buildings pool, until the young age of 95.  These achievements were only possible given her tenacity and unending energy.

Given Olga's energy it is not surprising that she was active with Folklorama for the Ukrainian Pavilion, which was hosted annually at the Labour Hall; she managed the kitchen team which started cooking in early spring to stock the freezers with thousands of dozens of perogies and cabbage rolls.  When Olga was not in the kitchen running it like a fine-tuned military operation, she could be found on stage signing traditional Ukrainian songs with her choir.

In her final decade Olga took the time to teach the younger generation her perogy and cabbage roll secrets and while she never measured, she always created perfection.  Olga was well known for her ability to cook large quantities of fantastic food that always put a smile on people’s faces, it was not a meal with Olga if you did not eat seconds or thirds. Lastly, while Olga was no taller than 5 feet, she was one of strongest in the family and she gave notoriously fantastic bear hugs – you knew you were loved when she hugged you that hard.

Olga was an independent strong-willed woman who lived on her own until the age of 101, when she gracefully transitioned into the care of Holy Family Home in Winnipeg.   At Holy Family she was well liked, participated in events, took up colouring and art, assisted with gardening and seasonal decorating of the facility.  Olga could often be found looking out the window at nature or nose deep in a good book.

Family was always central and vitally important to Olga. No matter where she lived her walls were filled with photos of family near and far.  She would look forward to visits, updates, and phone calls where she would hear the most recent stories of her children, grandchildren, and great-grandchildren.   One way Olga showed her love was to make sure that whoever was visiting went home with an arm full of their favorite Ukrainian foods – these treats were even shipped across Canada when needed.

We were all sad to see Olga pass, but we know she is in a better place back in her kitchen and at the bingo table with family and friends she has missed for years.   We will miss you Mom, Baba, and Olga but you will never be far from our hearts.

Memorial Service will be held on Monday, January 17, 2022 at 1:00 p.m. at Cropo Funeral Chapel, 1442 Main Street.  Covid procols will be in place. ID and vaccine cards will be checked to allow entry.

The family asks that in lieu of flowers please consider making a donation to Holy Family Home or Ivan Franko Manor in memory of Olga Pawlychyn.

Share Your Memory of
OLGA
Upload Your Memory View All Memories
Be the first to upload a memory!
Share A Memory
Send Flowers
Plant a Tree