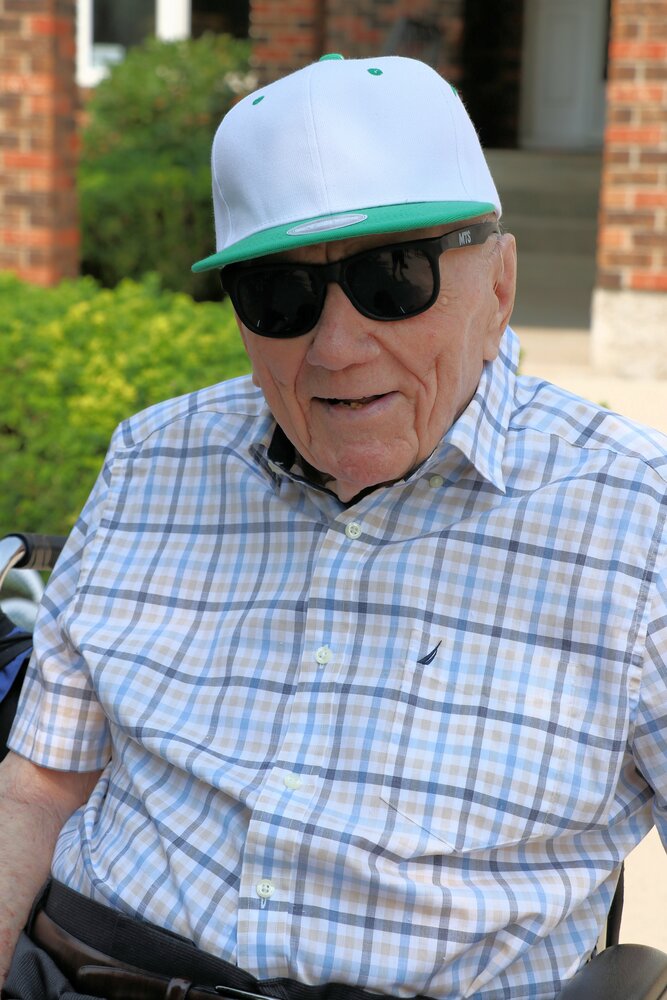 Bill passed away peacefully at the milestone age of 100 and is now reunited with the love of his life, Josephine.  He is lovingly remembered and will be sadly missed by his daughters Nancy (Don) and Susan (Bill), sons John (Shirley) and Bill (Sharon); eight grandchildren and eleven great-grandchildren.  Bill was the last surviving member of his generation in the Neil and Schan families.

Bill was born and raised in North Winnipeg.   In his formative years, he attended St Joseph’s RC School, and later became a lifelong devout parishioner of St Joseph’s Church.  Bill graduated from St John’s High School and was an accomplished athlete in many sports, excelling in both baseball and hockey.  Future career goals were interrupted when Bill volunteered to serve in the Canadian Armed Forces during World War II.  Bill attained the rank of Sergeant – wireless operator in the 8th Reconnaissance Division.  Following training in England, Bill and his comrades landed in Normandy in June, 1944.  The war ended for Bill when he was severely wounded in August, 1944.  His armoured car was hit with an 88mm shell, leading to the loss of his left arm.

Bill returned to Canada and was hospitalized for three months at Deer Lodge Hospital to heal from his injuries.  Afterwards, he returned to school and eventually  was employed by the Prosthetic Services Dept at the very hospital in which he recovered.  Bill later became the Regional Superintendent of the department until his retirement.  In his spare time, Bill was an avid golfer and curler.

Bill was also instrumental in the formation of the Child Amputee Program in 1975, sharing his knowledge and positive outlook through CHAMP seminars, media interviews and school presentations.  Bill received the Distinguished Service Membership and Honourary CHAMP membership awards.

Bill and Jo were married on June 21, 1947 at St Joseph’s Church and enjoyed 66 fulfilling years together.  Despite their many varied interests, family was always a priority.  Whether it was standing on snow banks at hockey games, watching baseball games or listening to countless hours of piano practice and recitals, Bill and Jo were always in attendance providing their children with never ending support.

Bill and Jo were accomplished card players.  In fact, a few years ago, Dad achieved a “29 hand” in cribbage which was an accomplishment he never let us forget!  Dad served on the Executive and as President of the St John’s Sportsmen’s Club and spent many summers vacationing at Green Lake.  Dad and Mom also loved to travel, visiting Britain, France, Russia, United States, Mexico and of course, the country of which they were most proud – Canada!

The family would like to extend sincere appreciation to the Prime Program at Deer Lodge Centre, specifically Dr Roche, Dr Albak and Nancy Fiebelkorn.  Their support and that of Friendly Caregiver Seniors Care, made it possible for Dad to remain in his home.

A memorial service for immediate family only will be celebrated on Tuesday, October 12 at St Joseph’s RC Church.  In lieu of flowers, donations may be made to the War Amputations of Canada CHAMP Program.

Share Your Memory of
WILLIAM
Upload Your Memory View All Memories
Be the first to upload a memory!
Share A Memory
Send Flowers