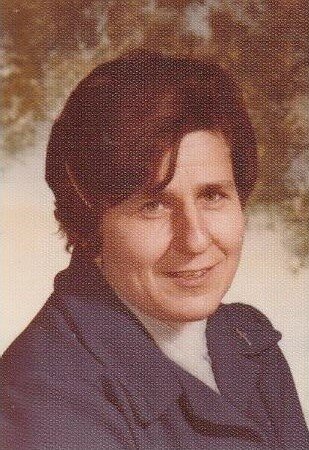 Sr.  Mary Basil died on 9 September 2021, in Holy Family Home, Winnipeg MB at 90 years of age and 70 years in religious life. Mary Kunanec was born on August 17, 1931 in Wolverine SK, to Dmytro and Maria Kunanec, who had immigrated to Canada from Yavoriv, Ukraine, in the late 1920s.

In 1942, the Kunanec family moved to a farm near Bronte ON, in search of a better life. A year later, they moved to Scarborough ON.

Mary’s education began at Mile End School in Wolverine and continued in Ontario. Excelling in studies, she skipped grade 7. She graduated with a Grade 12 Proficiency Award.  In 1950 she completed Teachers’ College in Toronto.

To earn money for her schooling, Mary and her siblings worked during the summer on tobacco farms in southern Ontario. It was hard work, but they enjoyed each other’s company.

The Kunanec children were raised to find their strength in their faith. In this atmosphere, Mary developed her own strong faith.

Mary first met Sisters Servants of Mary Immaculate in their church in Saskatchewan, where the Sisters taught catechism during the summer. When the family moved, she met the Sisters again, at Holy Eucharist Church in Toronto.

Mary entered Mount Mary Novitiate in Ancaster, Ontario, in August 1951. Taking the name Sister Basil, she professed her First Vows in 1954, and Final Vows in 1957. Later, she was known as Sister Mary Basil.

She taught and was principal at St. Ann’s School in Ancaster and Immaculate Heart of Mary School in Winnipeg. She also taught in Toronto, Montreal, Oshawa, Hamilton and Regina, as well as summer catechisms in Saskatchewan, Manitoba and Ontario. Her generosity in service, intelligent and warm approach, and her creativity were appreciated by both co-workers and students. Her humour and attentiveness made her a favourite of many students.

Sister Mary Basil was an avid reader and loved to play the piano, do handwork and sketch. She loved nature and animals, especially cats, and fully appreciated a good story or joke.

Sister Mary Basil was awarded a Knights of Columbus scholarship to pursue studies in Slavistics for 1960-61. However, with deteriorating health she was unable to pursue those studies. She was grateful for all opportunities for healing and spiritual growth and valued the support of her community.

Visits with her family were always treasured throughout her life.  Their love and support, in person, by mail or by phone were life giving.

Even as she carried this difficult mission of suffering, what was evident was her deep love for God, the Blessed Mother and her vocation.

When it was evident that active ministry would no longer be possible, Sister Mary Basil moved into a more contemplative way of life. Eventually she needed a higher level of care, and in 2003, she was admitted to Holy Family Home in Winnipeg, where she resided for the last 18 years.

She was predeceased by her parents, three siblings in infancy, brother Volodymyr and sister-in-law Olga in Ukraine, brothers Emil, Robert and Michael, sister Anne (Sister Junia, SSMI), and niece Gail.

She is survived by her sister-in-law Joan (Michael) of Scarborough ON, sister-in-law Sylvia (Emil) of Toronto, and many beloved nieces and nephews in Canada and Ukraine.

Funeral services were held at Bethany Home with interment at Holy Family Cemetery. Charitable donations may be made in her memory to SSMI Lubov Foundation—Immaculate Heart of Mary School, or Holy Family Home. Cropo funeral arrangements.

Share Your Memory of
Sr. MARY BASIL
Upload Your Memory View All Memories
Be the first to upload a memory!
Share A Memory
Plant a Tree