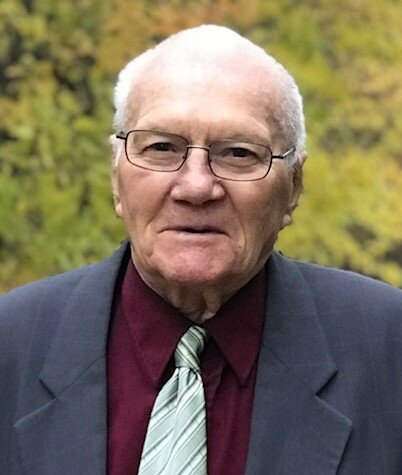 Please share a memory of JOHN FREDERICK MARTIN to include in a keepsake book for family and friends.
View Tribute Book

On August 21, 2021 peacefully with his daughter at his side John Frederick Martin Fey passed away at Red River Extended Care in Selkirk, Mb at the age of 90.

He was born March 6, 1931 in Stead, Manitoba to George and Adele Fey.  He was the second oldest child and oldest son out of seven children.  He grew up on the farm in Grand Beach, on Fey Road which is named after the family. Johnny worked at Lockport Appliance, CPR as a long distance truck driver, then in the CPR terminal on Keewatin.  He then worked for Eaton’s delivering parcels in Garden City and then drove a forklift in Eaton’s warehouse until he retired.

After he retired, he kept himself busy with his passion of building. He helped all his kids renovate their houses.  He even helped many of his grandkids, nieces and nephews with renovations to their homes and cottages. His work was always done with such perfection.

Fishing was his favorite thing to do.  He would start fishing before the sun came up, fish for a few hours, then take a little nap and then he would be right back out there catching his limit again. It would only be a pickerel/walleye that he would keep and he would only keep the little ones. He always said the little ones tasted better.

He enjoyed playing canasta, cribbage, bingo and numerous card games. He had a love of dancing, especially doing the polka.

He moved into the Lions Manor Apartments in Selkirk to be closer to his kids. He made a lot of new friends there and loved playing bingo and card games with them. After 3 years at the Lions Manor he moved to Red River Extended Care where again he made more new friends.

At this time the family would like to extend many thanks and their gratitude to the Doctor, nurses, care workers and staff at Red River Extended Care for taking such good care of our dad during Covid when we were unable to visit.

In lieu of flowers, please make a donation to a charity of your choice.

Share Your Memory of
JOHN FREDERICK MARTIN
Upload Your Memory View All Memories
Be the first to upload a memory!
Share A Memory
Send Flowers
Plant a Tree