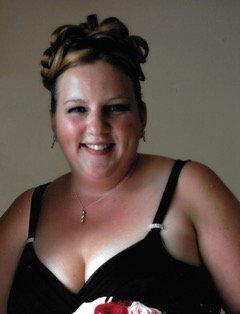 On Sunday, July 25, 2021 Stephanie left this world to join her grandmother Alma King. She had experienced a severe heart attack at work on Saturday, July 13 and was rushed to St. Boniface Hospital where she later lost her battle to stay with us.

Stephanie will be sorely missed by her children Brody (13) and Abby (7) and their father Garret Crellin, her mother Susan King, her step-father Tony (Janet) Pawlowski, her brother Matthew Pawlowski (Alysha), and Garrett's mother Judy Crellin. She also had many good friends who loved her dearly and will miss her smile and great humour.

Stephanie grew up in Transcona and graduated from Murdoch McKay Collegiate. After school she had several jobs before becoming a valued employee at the Costco on Regent Ave. where she had worked for over 20 years.

Stephanie's whole world were her children. When she wasn't at work, she was driving them to lessons or hockey events. She became a real “Hockey Mom” and attended numerous hockey games and tournaments to cheer on Brody. Then as Abby grew older it was off to gymnastics, ballet and dance classes. Steph spent many hours trying to help Abby with her French Immersion homework (even though she had no knowledge of the French language) until Brody stepped in to “save the day”. Stephanie has boxes of school papers and pictures of the fun times they shared together.

Stephanie and her mother Susan shared a special bond. There was seldom a day when they didn't have phone contact and often got together for lunches or chats on Susan's deck.

Stephanie loved to travel and was always up for camping or packing her suitcases and heading off to Hawaii, Mexico or Jamaica. Susan often accompanied her on these excursions.

The family would like to express sincere thanks to the staff in the Acute Intensive Care ward of the St. Boniface Hospital for the care they gave Stephanie and for the compassion that they showed to her family. Also a special thanks to Kristy Leochko-Morken who was constantly on call for the family during that terrible week while Steph was in the hospital.

Cremation has taken place and a small private gathering will be held to honour the memory of dear Stephanie. We would like to invite friends and family to share their stories and remembrances of Stephanie on this site.

Share Your Memory of
STEPHANIE
Upload Your Memory View All Memories
Be the first to upload a memory!
Share A Memory
Plant a Tree