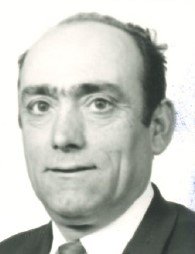 It is with deep sorrow & grief that Jose Constancia, aged 98, passed away at Grace Hospital peacefully after a short illness on July 17, 2021 with his family by his side. Jose leaves to mourn his grandson Michael (Shannon). Jose was predeceased by his parents, mother Maria Pereira De Medeiros & father Joao De Medeiros Constancia; his beloved wife of over 70 years, Maria, as well as by daughter Connie, brother Manuel, and sister Silvana Das Neves Medeiros Silva.

Jose was born in a town called Relva on the island of Sao Miguel in the Azores, Portugal on October 15, 1922. Jose lost his mother early in life, and he began working at a very young age to help support his family, while his sister Silvana took over the household to care for her brothers and father.

Jose & his “querida” Maria were married in Portugal in 1946, and after several years he left his family behind to venture first to the United States, and later to Canada, in search of a better life for his family. He worked as a CN foreman across Canada to continue to support his family in Portugal, while also building a new life for them in Canada, finally settling in Winnipeg. After obtaining his Canadian citizenship, and a lengthy time apart from his family, Jose was able to bring his wife and daughter to Winnipeg to join him, followed by his sister Silvana and her husband Gilberto, his wife Maria’s parents, as well as numerous other extended family members.

Jose was an extremely devoted family man and legendary provider for his family, as he & Maria at times were known to have as many as three jobs each simultaneously. Jose ultimately settled into a career at Health Sciences Centre in the kitchen as a dietetic aide, where he remained until his retirement at 65. Never one to remain idle, Jose continued to work at the local corner store half days until the age of 86. His faith & belief in the Lord drove him throughout his life, as he remained an unshakeable anchor for his family, a dutiful provider, and a deeply kind, decent, humble and charitable man to all he met. Although of modest means, Jose & Maria sponsored numerous children in developing countries for many years until his death, as well as sponsoring church missions.

Jose assumed a dual role as both grandfather and father to Michael, whom Jose and Maria raised from the age of two, both sacrificing & doing without for themselves so that Michael would not. Jose had a personality that was larger than life, and he had many passions including fishing, gardening, winemaking, and most of all, relaxing & camping with friends and family around a fire.

Special thanks to niece Otilia & her husband Jose Medeiros, who became permanent fixtures in Jose’s daily life with tireless caregiving & support, and which gave him immeasurable joy. Jose was also appreciative to Roy Borges for all his help throughout the years with many home projects, including his beloved & elaborate garden. The family would also like to thank WRHA Home Care Case Coordinator Edward Andrusiak for his attentive professionalism, which helped to maintain Jose to live independently for the last several years. Due to the long list of friends & acquaintances that Jose touched, it would be impossible to thank everyone. The family apologizes to anyone omitted, although Jose & his family were deeply grateful to all. Jose’s loved ones take comfort in his lifelong motto, to trust in his faith that all was in God’s hands.

Viewing will be held Friday, July 23, 2021 from 6:00-8:00 PM at Cropo Funeral Chapel, 1442 Main Street. Due to Covid restrictions, a maximum of 25 people permitted in the chapel at one time, and visitation limited to 15 minute intervals, unless not at maximum capacity. Funeral service will be held Saturday, July 24, 2021 at 10:00 AM, also at Cropo Funeral Chapel, with Father Andre Lico officiating. Interment will follow at Holy Ghost Cemetery, 4387 Main Street.

Share Your Memory of
JOSE
Upload Your Memory View All Memories
Be the first to upload a memory!
Share A Memory
Plant a Tree