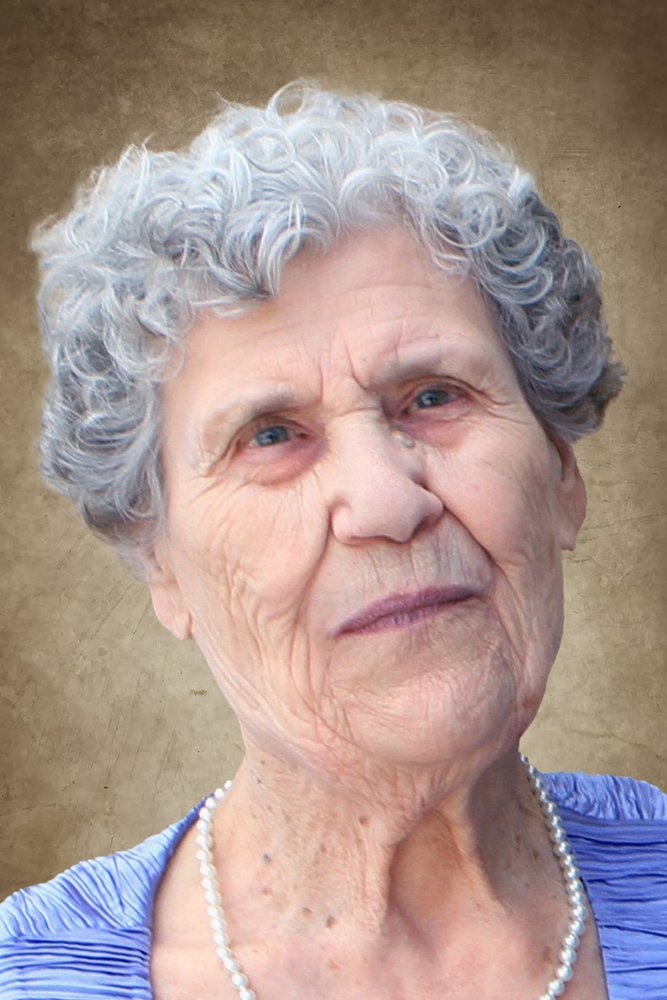 With deep sadness we announce that our beloved Mama, Mother-in-law, Baba and PraBaba fell asleep in the Lord on Thursday, July 8, 2021 after suffering a sudden major stroke. She was predeceased by her parents, several siblings and family members in Ukraine, and her husband, Volodymyr (Walter) in 1997. Left to mourn her loss are daughter Lilia and son-in-law Ron Sorokowski, grandson Robbie-Bohdan and his wife Lisa, great grandson Alexander, the Sorokowski and Papetti families, her sisters-in-law in Ukraine, a great many nieces and nephews in Ukraine, and family friends.

Mama was born in eastern Ukraine to parents Nazari and Ekateryna. She had seven brothers and one sister. Halina completed her 10th year of schooling in Kryviy Rih where she studied at the Pedagogue Institute. After several months at the Institute, all 400 students including Halina, were dispatched by government order to various schools for their practicum. In 1941 the War interrupted the students’ studies and practicum. When the Germans invaded Ukraine, the students and other youth were forced into working in labour camps in Austria/Germany. Halina was one of those who ended up in Austria, where she worked in an airplane factory. Once the war ended she settled into a displaced persons’ camp. After a time she travelled to work in Great Britain’s Rochdale, Lancashire.

In October 1948, Mama married the love of her life, Volodymyr. In 1952 they left for Canada, settling in Winnipeg. Their only child, daughter Lilia, was born that same year. Here, they became actively involved in the Ukrainian community. Halina taught Ukrainian “ridna shkola” classes at the Institute Prosvita and the Ukrainian National Home, and in various Orthodox parishes: All Saints, Transcona; St. Michael’s; and at her home parish St. Mary the Protectress Ukrainian Orthodox Cathedral (Sobor) where she also taught Ukrainian classes and was director of the Sunday School for 27 years. At the same time, Mama was employed for 20 years at the Consistory of the Ukrainian Orthodox Church of Canada as the assistant editor of the church newspaper, Visnyk. In addition to her teaching, she was a member of the Women’s Association and a member of the Sisterhood and Brotherhood of St. Andrew at the Sobor parish.

Mama was a voracious, avid reader of Ukrainian novels, history and about the lives of the Saints; this gave her the most pleasure. She often said that immersing into reading was like being away on vacation. She loved gardening and enjoyed baking (her tortes and cakes were works of art). Her varenyky were feather-light and she easily shared her recipe for them and other baking whenever asked. She was a giving, loving and caring person who embraced life with constant optimism. In spite of having endured great hardships during the Holodomor (man made famine of 1932-33) and then the war years, she maintained a positive outlook and counted her blessings every day. Her faith was integral to her being and saw her through the most difficult times. Her family was most important to her and she demonstrated her love for each of us by her kind deeds and thoughtful gestures. Mama stayed faithfully connected to family in Ukraine, writing letters and sending care packages. Halina lived a good life, a full life, and we were blessed to have her with us for as long as we did.

Heartfelt thanks to the paramedics for their quick response, and to Dr. Rayhana Alarakhia and the staff at the Health Sciences Centre who tended to Mama in such a compassionate, caring, respectful way. Many thanks to our niece Dr. Selena Papetti for her coordinating efforts in Mama’s care. Thank you to everyone who has reached out and been so supportive during this emotionally difficult time. We are deeply grateful to each of you. Heartfelt thanks to Fr. Taras Udod for his quick response in our time of need. Many thanks to Fr. Alexander Harkavyi for his ongoing support. We are most deeply grateful.

Flowers are gratefully declined; donations may be made to St. Mary the Protectress Ukrainian Orthodox Cathedral, or a charity of your choice.

Due to Covid restrictions, the funeral service will be private. It will be livestreamed on Facebook and YouTube, and can be found at www.stmarytheprotectress.ca

Condolences may be left on Halina’s obituary page at www.cropo.com.

Share Your Memory of
HALINA
Upload Your Memory View All Memories
Be the first to upload a memory!
Share A Memory
Send Flowers
Plant a Tree