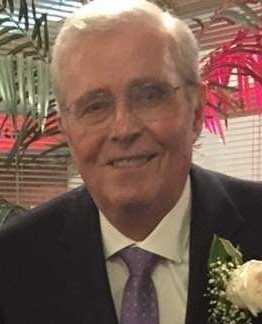 It is with great sadness we announce the passing of our beloved husband, father, and grandfather on July 8, 2021.

Harry is lovingly remembered by his wife of 55 years Judy, daughter Angela, and sons Tom (Karen), Edward, and Paul. Grandchildren Jarrett, Matthew, Joshua, and Miranda. Brother John, sisters Nellie and Elsie, as well as numerous nieces, nephews, and dear friends. He was predeceased by his parents William and Mary, sisters Anne and Kay, and brothers Tom, Mike, and Nick.

Harry was born on February 4, 1937 and grew up on the family farm in Arborg, MB. As his siblings left for the city, he stayed on the farm as long as he could until it sold.

Harry met the love of his life Judy, and they married on May 14th, 1966. After a few years they settled into their home on Magnus Avenue where they raised their four children.

Always wanting to be involved and help the members of his community, Harry began his political career in 1974 when he was elected to represent the North End’s Mynarski ward. He proudly served as their Councilor for three decades. He worked on many important issues, participated on many committees, visited Lviv, Ukraine officially representing the City of Winnipeg to our sister-city, and finished his time in office as Deputy Mayor. The highlight of his career was meeting and working with Mother Teresa to build a Missionaries of Charity Woman’s Shelter. As a result of a sudden illness, Harry retired in 2010. He loved being known as “The Mayor of the North End”.

In 2014, to commemorate his dedication to his community and passion to preserve the riverbanks, the City of Winnipeg honoured him by renaming the Redwood Bridge to the Harry Lazarenko Bridge.

Harry was a member of the Ukrainian National Federation (UNF) Club for most of his life. He helped the organization over the years in many capacities, such as serving on their board of directors, as well as Camp Manager at Camp Rusalka. In 2019, the Ukrainian Canadian Congress - Manitoba Provincial Council presented him with the Bolava Award to commemorate his contributions to the preservation and development of the Ukrainian Community in Manitoba.

As busy as Dad was, family always came first, and he always made time for every member of our family. As kids he took us camping and countless trips to visit the old family farm. We would also visit his siblings and our cousins, where we had many adventures together. There isn’t a member of our family who won’t miss him as much as we will.

The family wishes to express our sincere thanks to Dad’s home care attendants. The care they gave Dad over the years was always provided with such kindness and respect.

If friends so desire, donations may be made to a charity of one’s choice.

Family and friends may sign a book of condolences at www.cropo.com

Dad, we love you more!

Share Your Memory of
HARRY
Upload Your Memory View All Memories
Be the first to upload a memory!
Share A Memory
Send Flowers
Plant a Tree