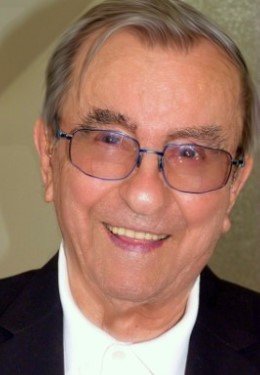 Early on the morning of April 14, 2021 our dad, grandfather and great-grandfather Stephen Crane peacefully passed away at the age of 97.

He will be deeply missed by his daughters Karen (Dennis) and Joy (Len), his grandchildren Chris, Chris (David), Shannon (Jeremy), Philip (Lyndsay), Barbara (Wade), Lindsay (Darryll) and his great-grandchildren Julia, Alexander, Van, Wyatt and Gracie. He will also be missed by his grand-puppies Lily and Rocky.

He is survived by his sister Lena and numerous nieces and nephews who he enjoyed visiting.

Dad was a veteran of World War II and proudly served in the Lake Superior Regiment, Motor Division.  He served and was wounded in combat in Europe.  Recently he was awarded the rank of Knight of the French National Order of the Legion of Honour in recognition of his involvement in the liberation of France.

His working career was at Robinson & Little Company working his way up from the warehouse to Manager of the Construction department.  His work took him from western Ontario through to Vancouver Island.  There weren’t many places that Dad hadn’t been.

Dad loved music and played the mandolin, accordion and mouth organ.  He passed his love of music down to his daughters.

In his retirement he enjoyed the lake and had a cabin at Barrier Bay in the Whiteshell.  Dad and Mom enjoyed many years and made many friends during their time at the lake.  Dad enjoyed fishing, boating, dining out, garage sales and VLTing (not always in that order).

The family would like to thank Deer Lodge Centre staff for their gentle caring of our dad through this difficult time.  We would also like to thank Dr. Versha Banerji and the wonderful staff at CancerCare and Dr. Sahar Sami for their kindness and support.

Dad was a gentle soul who made friends wherever he went.

Due to covid restrictions a private family service will be held.

Share Your Memory of
STEPHEN
Upload Your Memory View All Memories
Be the first to upload a memory!
Share A Memory
Send Flowers