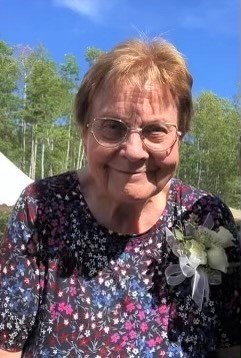 It is with great sadness that we announce the passing of Lena Catherine Smith age 72, at St. Boniface Hospital in Winnipeg.

Lena was predeceased by her husband Norman Smith.

She is survived by her children Randy (Tannis) and Greg (Tara), her grandchildren Alexea (Clayton), Kerryssa (Matt) Owen, Aubrey, Alex and her great-granddaughter Victoria.  As well as her sisters Pat, Betty (Peter), sister-in-law Mary and many nieces and nephews.

Lena was born and raised in Meleb Manitoba, she moved to Winnipeg where she married and worked many years at the Canada Revenue Taxation Center before her retirement.  Lena enjoyed spending many summers camping in the Whiteshell, most notable at Betula Lake.  Some of her many hobbies included Bingo, snowmobiling, puzzles and watching curling…her long phone conversations with friends and family will be missed.  The family would like to thanks the many nurses and doctors at Concordia Hospital and especially St. Boniface Hospital where she spent her final days in comfort care.

As per Lena’s wishes, cremation has taken place and interment will follow at a later date.

In lieu of flowers, a donation to the charity of your choice in her name would be appreciated.

Share Your Memory of
LENA
Upload Your Memory View All Memories
Be the first to upload a memory!
Share A Memory
Send Flowers