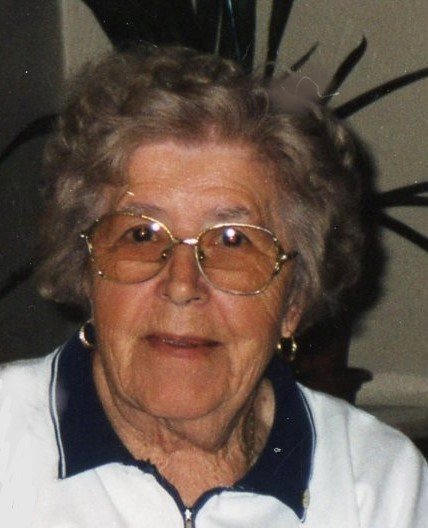 Our mother was born February 13th, 1923 in Poland.  At the age of 16, in 1939, she and her mother were captured by the invading forces and interned in a Nazi work farm for the entire war.  Tragically, her mother died after being struck by lightning in 1941. After she was liberated, she chose to emigrate to England, then Winnipeg in 1947. She worked at Misericordia Hospital to pay off her debt for transportation to her new land.  There she met Edward Mickaniec who had also emigrated to Canada after serving in the Polish army.

They were married in 1949 and raised their children in the heart of the North End. Every home they owned, be it on Redwood, Alfred or College, had fabulous vegetable and flower gardens. Stefani’s  preserved pickles and tomato juice were savoured by anyone fortunate enough to have sampled them. Stefka and Eddy would not miss any opportunity to go mushroom or fruit picking with friends and family and then freeze, pickle or dry them to have during the winter. Their home-made sauerkraut was a yearly fall tradition made in a huge crock in preparation for the perogies and perishky that were to follow.  Knitting, crocheting, needle point and sewing were her favorite pastimes. Mama was especially proud of her needle point Poppy pictures and Polish Eagle.

Time spent with family was important to her. Stefania prepared great picnics for outings at Winnipeg Beach when we were younger.  She would make elaborate polish meals for family gatherings. Visits with her children, grandchildren and great grandchildren in Whitemouth, Tyndall, Winnipeg, and Lakeshore Heights brought her great joy.

Babcia enjoyed listening to CJOB and listening to waltzes, polkas and polish music on her stereo. For such a gentle soul, she would get really worked up watching AWA wrestling matches on tv. She had a Polaroid camera that she would take pictures of Hulk Hogan and Brett the Hitman Hart when they were having matches on the screen. A dedicated follower of wrestling celebrities. Stefania took many pictures of family and made several copies to send to relatives in Poland.

We would like to thank the dedicated staff at Holy Family Nursing Home particularly everyone on Four A St Joseph’s for their loving care during the last seven years of her life.  A special thank you to Anastasia who has been a companion to Stefania for more than a year during times of Covid.

A family service was held at Cropo Funeral Chapel followed by a burial at Holy Ghost cemetery beside Edward who died in 2001.

Donations in memory of Stefania Mickaniec can be made to Holy Family Nursing Home (Lubov Foundation) or to a charity of your choice.

Share Your Memory of
STEFANIA
Upload Your Memory View All Memories
Be the first to upload a memory!
Share A Memory
Send Flowers