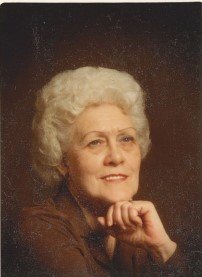 Our family sadly announces the passing of our mom on February 22, 2021 in Winnipeg at the age of 95.

Mom was born after midnight on February 13th 1926 (the 14th) in Winnipeg, Manitoba to parents Emma and Gustav Dalke.  She was the oldest of nine children.   On August 7th, 1945 she married the love of her life Robert (Bob) Lower.  In June of 1947 she gave birth to her first child Richard, followed by Robert (Bob), Catherine (Cathy) and later Martha (Martie).

When mom's mother died from cancer, she left behind six under age children.  So despite having three children of their own at the time, mom and dad took two of her young sisters into their home and looked after them until they married. Her brother Tom and sister Marge also stayed for a time with them when they finished school. Mom always had a spiritual side to her.   She had a deep love for God.  Though she never took us to church she taught us to pray to him.    She always said “I was born a lutheran and I will die a lutheran”.   That all changed in 1973 after she read the Bible based book “the Truth that Leads to Eternal Life”.   After reading it she exclaimed “this is the truth”.    She was baptized as one of Jehovah's Witnesses on July 12, 1974.

Three months later Dad suddenly passed away in death.  She lovingly cared for him since 1972 when he suffered a brain injury from a workplace accident. Though she grieved his loss she had confidence in the Bible's promise that soon there will be a resurrection on the earth where death and sickness will be a thing of the past.

Mom was employed by Dominion stores as a head cashier and bookkeeper for over twenty-five years until her retirement. Once retired she was able to spend more time with family, friends and talking to people about God's Kingdom and the blessings it will bring.   As a member of the Inkster Gardens Congregation she had the pleasure of assisting friends in anyway she could.    In later years due to declining health, she was unable to attend the meetings in person but enjoyed listening to them by telephone.

The family would like to sincerely thank the staff of the Rivereast PCH (Charity Road) for their loving care of mom.   We also want to express our thanks to Dr. D. Haligowski for caring for mom over the many years as her physician. There will be a zoom memorial service held on March 20, 2021 at 1:00 p.m.

To request the zoom link, please contact the family at: MarthaLowerfuneral@hotmail.com

Share Your Memory of
MARTHA
Upload Your Memory View All Memories
Be the first to upload a memory!
Share A Memory
Send Flowers