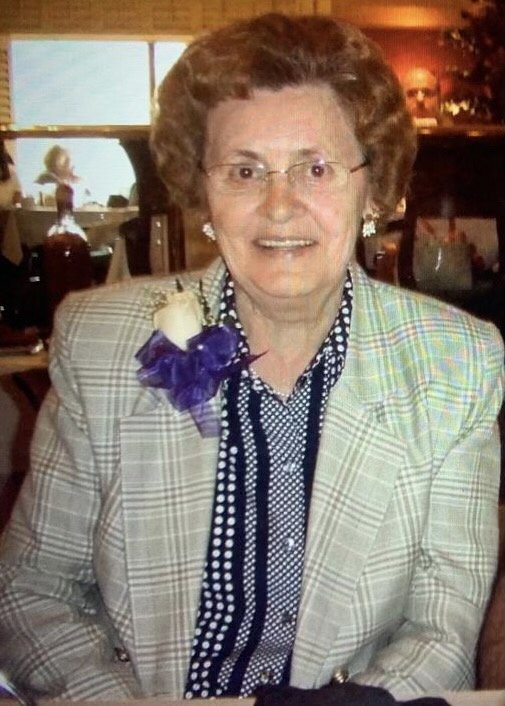 After an 11-year struggle with Alzheimer’s, Eleanor peacefully passed away at The Convalescent Home of Winnipeg on January 10, 2021 at 91 years of age.

She will be lovingly remembered by her daughter Cheryl (Terry) Bartos, son Larry (Cynthia) Wandowich, granddaughters Jocelyn (Chris Fiola) and Kayla, as well her brother Eddie (Pearl) Evertoski, sister-in-law Pauline Evertoski and many relatives and friends.  She was preceded in death by her loving husband Joseph and her brother Joe Evertoski.

Eleanor was born to Mike and Annie (nee Pfeifer) and raised on a farm in Ladywood, MB until being sent in her teens to Winnipeg to live with her Uncle Anton and Aunty Mary Baker to get a taste of “city living”. In her younger years Eleanor worked at a bakery, at Nutty Club and as a sewing machine operator. On July 5, 1952 Eleanor married the love of her life Joe and became a happy home maker raising two wonderful children. They were married for 58 years. While at home, Eleanor had the most unique part time job. She was a home sewer for MGM Sports and would “hand sew” all the numbers and logos onto the Winnipeg Jets jerseys and a few other teams. She even prepared the Edmonton Oilers first jersey for some kid drafted named Wayne Gretzky. Although Eleanor never learned to drive, she always found a way to get where she needed to be - walked, biked or took the bus.  That included “Nana’s” weekly shopping bus trip downtown with Jocelyn for a malt at the Bay.  She adored her two granddaughters, and supported their activities by attending athletic games, dance and very much enjoyed Kayla’s piano playing and Folklorama trips.

Eleanor’s passion was cooking.  Every meal was homemade and it wasn’t complete without dessert. Her recipes have been passed down and will live on forever! Eleanor’s other passion was being with people. They enjoyed many nights of dinners, Rummoli playing and social gatherings with various family and friends. As her family grew so did her willingness to be involved - school committees (from Faraday to St. John’s High), sports, recitals, and many many church events.

Since 1966, Joe and Eleanor were parishioners of St. Anthony of Padua Roman Catholic Church. Eleanor was a member of the Catholic Women’s League for over 50 years.  She not only attended mass weekly but served by being part of many Church committees - be it selling religious article items before and after mass, running the canteen and doing the books for the church Bingo for over 35 years.  The many Tea’s, Dances (including New Year’s Eve), priest anniversary’s, celebrations, and serving at funerals.  Where there was a kitchen, you’d find Eleanor! As life moved on into the retirement years with Joe, her interests varied between babysitting, travelling with family and being part of the church’s Seniors club.  Of course, at the weekly card day there was Eleanor making the coffee in the kitchen! She was an amazingly organized person and people loved spending time with her.

Unfortunately, due to COVID-19 restrictions, we will be having a private funeral mass to be celebrated Monday January 18, 2021 at St. Anthony of Padua Church.  Mom will be laid to rest with Dad at Glen Eden Memorial Gardens.

The family wishes to thank The Convalescent Home of Winnipeg for their unwavering daily care and compassion.

In lieu of flowers, donations may be made in Eleanor’s memory, to the Convalescent Home of Winnipeg.

Heaven blessed us with Eleanor!