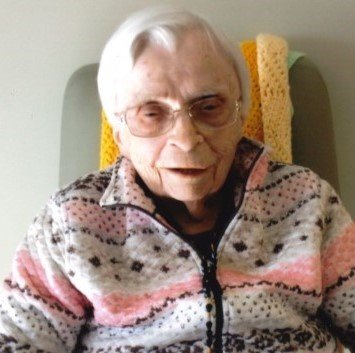 The family, friends, and caregivers of Anne Stefik are saddened to announce her passing on Saturday, December 5th, 2020.

She is survived by her three sisters, Katie Linde, Mary Miller, Pearl Partridge (James) and several nieces and nephews.

Anne will be remembered for how independent, active and healthy she was, even as she reached her 99th year. Sadly, Anne’s journey ended due to COVID-19. Like many families this year, Anne’s loved ones were sad to not be able to be with her, hold her hand, and share their love in person when she passed. Anne had a strong support system including St. Nicholas Ukrainian Catholic Church, the residents of The Holy Family Seniors Tower, The Holy Family Home and The Sisters; and her many good friends. Her family is grateful for the wonderful care and support that they have provided. Anne’s family know that she has now been reunited with her loved ones in heaven.

Anne’s Early Years: Anne’s father, Samuel, and her mother, Helen were born in the Village of Wasyliw in the province of Rawa Ruska, Western Ukraine. Her father served in the Austrian Army for two years during the First World War and was a prisoner of war during the following year. Sam came to Canada in 1927 at the age of 28 on the Letitia, leaving behind his wife and three children - Anne, Katie, and unborn son, John. Sam worked various jobs over seven years to be able to bring Helen and his children to Canada and live in a house on land that he had purchased. In June of 1934, Helen and her three children were able to make the journey to join him in Canada, arriving on the Ausonia. Anne would later recount the difficult journey across the Atlantic Ocean. After landing in Quebec, the family travelled to Wadena, Saskatchewan by train. Anne’s sisters, Mary and Pearl, were born in Canada six years later.

Anne’s Middle Years: Anne moved to Winnipeg at the age of 20. She worked at various jobs at the Children’s Hospital, where the Holy Family Home currently stands at Redwood & Main, and at the Health Sciences Centre. Anne also spent many years working in catering at the Fort Garry Hotel. Always in the public; Anne was polite, friendly, and learned to speak English.

Anne was a member of St. Nicholas Ukrainian Catholic Church, including their Ladies Auxiliary, for many years. She received her 50th year pin from the Auxiliary in 2019. She also volunteered at The Holy Family Home and joined their Auxiliary as well.

Anne’s Senior Years: Five and a half years after the death of her husband, Anne sold her home and moved into The Holy Family Seniors Tower where she resided until May of 2019. During this time she greatly enjoyed the accessibility of the Chapel, the Link, and the many wonderful people that she met.

On May 2, 2019, at the age of 97, Anne moved next door to The Holy Family Nursing Home. She was truly happy at the care facility and felt safe and well cared for. Anne was even able to converse with some of the staff and residents in Ukrainian.

She enjoyed many friendships in her senior years. Anne’s loved ones will remember Anne as the perfect perogy and cabbage-roll maker - always wanting to share her dishes with others. She took pride in picking out a new outfit for the day and wasn't one to sit at home. Anne regularly attended church service and never passed up an opportunity to go on an outing with friends. Although she did not drive, Anne had the gift of being able to navigate the area of Winnipeg with precision. Anne’s family and friends always knew that they could rely on her for directions and we will remember her for her generosity and giving spirit. May she rest in peace.

Following COVID-19 restrictions, a private graveside service will be held on Thursday, December 10 at 10:00 a.m. to honour her memory. Please feel free to leave a condolence at the Cropo website.

Share Your Memory of
ANNE
Upload Your Memory View All Memories
Be the first to upload a memory!
Share A Memory
Send Flowers