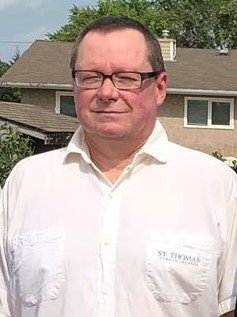 It is with great sadness that we announce the passing of Stacey Blair Beatty. Stacey passed away suddenly from heart failure on Tuesday, August 11, 2020 at the age of 58. He will be greatly missed by his father Wes, brother Darrel and wife Rae, nephew Shane, nephew Lyndel and wife Lynn, Nephew Devon and partner Santana, as well as many cousins, and his dog Ringo. He was predeceased by his mother Anna Mae Beatty and Grandparents Cecil and Jennie Ashcroft Stacey was born March 27, 1962 in Brandon Manitoba. Here he attended Valleyview elementary school, Vincent Massey High school and Assiniboine Community College. He spent his youth working and living in Brandon Manitoba. During his youth Stacey enjoyed spending most of his time with family at their cabin located at Oak Lake Beach, Manitoba. Here he enjoyed his life with family, cousins and friends. He spent many hours at the cabin swimming, water skiing, snowmobiling, mini-biking, fishing, ice fishing and hunting. Stacey also spent time visiting Grandparents and cousins at their homes and farms throughout Manitoba, Alberta, Ontario and British Columbia. His family always had a dog and as a result Stacey became a big animal lover and always had a cat or a dog for company. Stacey returned to the cabin as much as possible throughout his life to visit with his parents and grandparents Jennie and Cecil Ashcroft. Stacey worked in the electrical supply business and moved thought-out Manitoba living in Portage la Prairie, Dauphin, Flin Flon and Winnipeg as well as Kenora Ontario. He followed in his father’s foot steps becoming a member of the Brandon Shrine Club. He also enjoyed cooking and canning as well as gardening. Stacey spent the final part of his life in Winnipeg where he enjoyed to company of his dog Ringo, dad, brother and nephews and their partners. A memorial service will be held at the Cropo Funeral Chapel, 1800 Day Street Winnipeg, Manitoba on September 12, 2020 at 2:00 p.m. Due to Corvid Virus the service will be limited to 50 people. A detailed obituary, condolences, donations and live streaming can be viewed online at https://cropo.com. The live streaming is provided an alternative to travel in these times of Covid. Please contact Darrel to confirm attendance. A private family graveside service will be held at Oak Lake Cemetery at a later date.
Saturday
12
September

Share Your Memory of
STACEY
Upload Your Memory View All Memories
Be the first to upload a memory!
Share A Memory
Send Flowers