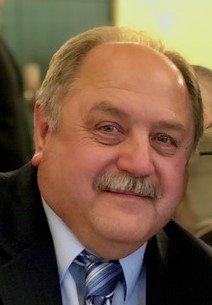 Randolph (Randy) Wayne Kapkey January 22, 1958 - July 23, 2020 It is with tremendous grief that we announce the sudden passing of Randolph Wayne Kapkey, cherished father, husband, son, brother, uncle and friend. Randy is survived by Andrea, his wife of almost 39 years, daughter Grace, son Alex (Brittany), mother Verna, sisters Valerie (Ian), Lorraine (Art) Stoesz & Diane (Wally) Kowaliuk, sister-in-law Deanna (Skip) Rohrer and mother-in-law Dorothy Mulder, as well as numerous nieces, nephews, and cousins. Randy goes on to join his father William (Bill) Kapkey, father-in-law Max Mulder, nephew Jesse Ducharme-Kapkey, and brother-in-law Raymond Ducharme. Randy was born to Bill & Verna Kapkey on January 22, 1958, in Winnipeg, Manitoba. After a childhood largely spent Ukrainian dancing at Holy Trinity Ukrainian Orthodox Church, Randy pursued a career in automotive mechanics and technology, a field in which his mind had a startling capacity. Randy met Andrea in 1975 while they both attended St. John’s High School, and where Randy knocked helmets on the school football team. After Andrea successfully caught the eye of the young linebacker, the two became an inseparable pair, ultimately marrying in 1981. It wasn’t until 1987 when Randy found his true calling, as a father, with the arrival of Grace in 1987, followed by Alex in 1990. In his younger years, Randy could be found either snowmobiling around Manitoba, putzky-ing around the family cottage in Gardenton, Manitoba, or ripping around the nearest dirt track in his mini-sprint race car. Upon entering fatherhood, Randy enjoyed taking his family on road trips, making sure to stop at any farm auction or garage sale they came across. The sound of a Star Trek rerun or the latest NASCAR race was a common fixture of Randy’s home life. Randy spent his life as a father guiding and cheer-leading his children, helping foster Grace’s love for anything old-timey, or quizzing Alex about Westerns. Randy also secretly enjoyed being the only person Joey, the family dog, actually liked, and was a self-proclaimed “cat whisperer.” It’s true (and he totally was). Randy was a pillar of strength and support for his incredibly lucky loved ones, always at his happiest when helping any of his family or friends when they were in need. He could always be counted on to be at the ready with just the right tool or just the right word. The absence of his presence is already so very noticeable. To say he will be missed is an understatement; the Randy-sized hole in our hearts is a loss that will be mourned for a long, long time. A closed ceremony by invitation only, limited to Randy’s immediate family and close friends, will be available for remote viewing via live stream on Saturday August 1st at 10:00 am. Link to view: https://cropo.com/tribute/details/7332/RANDOLPH-KAPKEY/obituary.html#tribute-start In lieu of flowers, the family has requested that people plant a tree in Randy’s memory.
Share A Memory
Plant a Tree