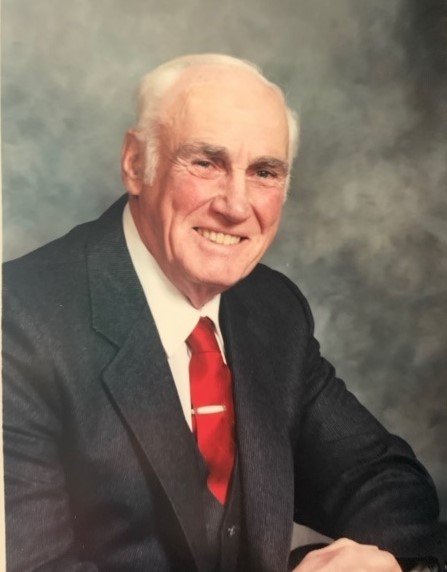 GORDON E. ZAHARIA b. November 29, 1927 -d. July 12, 2020 With great sadness we announce the sudden passing of Gordon on July 12 at the Deer Lodge Centre, Winnipeg. Gord was 92. He was born November 29, 1927 in Edson, Alberta to Joe and Marjorie Zaharia. A family of eight, they eventually settled in Transcona where Gord would spend the rest of his life. He began a lengthy railway career with CNR in 1942 starting as a brakeman and retiring as a VIA Rail conductor in 1988. Gord always had many railway stories to share, from the continuous crib games at the Rainy River bunkhouse to running the freight trains through some of the worst blizzards that have ever hit Manitoba. He was well respected on the job for his no-nonsense, serious approach towards railroading. In his earlier years in Transcona, Gord met the love of his life, Betty Still. They were married in 1948, and together they lived in Transcona, developing many lasting friendships throughout the years. They spent their earlier summers at Grand Beach and Ottermere, Ontario. Many of us recall the excitement of going to see Aunt Bet and Uncle Gord at 1210 Day Street during the Christmas season. They were both such fun, gracious and accommodating hosts. His generously poured drinks and her delicious baking will never be forgotten. Gordon enjoyed both fishing and hunting, many stories of which he shared. He had a real love for animals, especially his two cocker spaniels, Sparky and Dusty. Gord was a very pleasant and considerate gentleman, generous to the core, always willing to help others and as we all know, a very interesting conversationalist. Gord was a lifelong supporter of the Transcona United Church, a member of the Royal Canadian Legion and a proud member of the U.T.U (United Transportation Union). Gordon was predeceased by his wife Betty in December, 1999, as well as his brothers Tom, Dodi, Donald and sister Beverly. He leaves to mourn in his passing, brother Wilfred (Sylvia), sisters-in-law Anne and Flo, numerous nephews, nieces and cousins, many good friends, in particular, Murray Rougeau and Albert Ras. A special thank you to the wonderful staff at Deer Lodge Centre for providing such excellent care to Gordon as well as the staff at Devonshire House. A private family viewing will take place on Wednesday evening and a public graveside Interment will be on Thursday, July 23 at 11:00 a.m. at Transcona Cemetery, 5014 Dugald Road, with Lynda Trenholm officiating. In lieu of flowers, please donate to The Winnipeg Humane Society or a charity of your choice.
Thursday
23
July