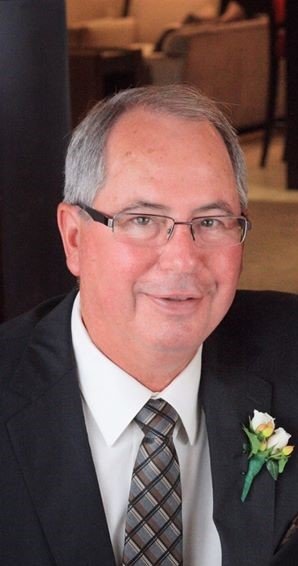 We are sad to announce the passing of Bill March on June 17, 2020 at the age of 70 years old. Bill was predeceased by his first wife Karen, son Graham, brother Gord, father Don and adoptive parents Jocelyn and Grace. He is survived by his wife Joan, son David (Amanda), mother Joan, sister Gloria, brother Don, grandchildren: Seth, Maren and Vivien, extended family and many friends. After completing high school in Morris MB, he attended the University of Manitoba where he graduated with a Bachelor of Physical Education degree in 1976. This is also the time when he met his first wife Karen, who was an excellent typist and helped with many of his university assignments. Bill began his teaching career at Sisler High School where he made life-long friends and coached a variety of high school sports. He spent time at St. John’s High School and furthered his education and transitioned to become a guidance counsellor, spending 9 years at R.B. Russell High School and later Tec Voc High School. He was a charismatic teacher, and beloved by many students who continue to remember him long after he retired from teaching. Bill combined his passion for the outdoors with his devotion to educating youths by taking students on wilderness excursions. He would reminisce on these trips with both students and friends as some of the best times in his life. He loved to fish and hunt, and taught his students how to do the same. When he was not in the boat pulling in a master angler Walleye in the Whiteshell, he could be found at the curling rink or on the golf course making a hole-in-one (of which he had several). At the golf course is where he met the second love of his life Joan. Joan and Bill quickly hit it off with their passion for golf and yearning for adventure. They enjoyed fun with friends on trips to Arizona, Portugal, a river cruise through Europe and Hawaii. It was on the Caribbean cruise where Bill proposed to Joan with a $10 Walmart ring as he was afraid she might say no and throw the real ring overboard. Joan did say yes (and got a real ring), and while they were only married for 5 years, Joan tirelessly carried for Bill throughout his battle with ALS. She is truly a saint and was by his side until the very end. Bill’s kindness and genuine interest in everyone and everything, his gentle, sweet manner and easy laugh will be remembered and treasured always. Special thanks to The ALS Society of Manitoba; to VIP home care, especially Lorie whose sense of humour and caring approach were so appreciated; to the WRHA Palliative Care Program, especially Dr. Bruce Martin, who so kindly helped us through the last two weeks; and to all the family and friends who supported Bill with visits, emails and phone calls over the last year. In lieu of flowers, donations to ALS Society of Manitoba would be greatly appreciated. Due to COVID-19 restrictions a private service by invite only will be held Friday June 26 @ 1PM. Live streaming will be available on cropo.com by clicking Obituaries at the top and searching Bill’s name. The recording will also be available for viewing in the future using the same process. An outdoor celebration of life will take place in mid-July with details to follow.
Friday
26
June