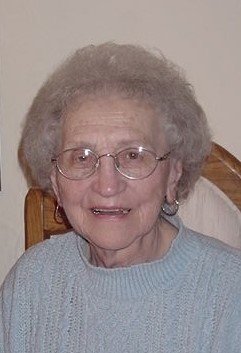 Mary Dovyak 1923 –2020 Despite her family’s (only half-joking) prediction that she would outlive us all, our Mom, Grandma and - most recently - “GG” has passed away at the age of 96. Mary Dovyak was born in Winnipeg on December 10, 1923 to Anne and Louis Medwid. She was proud to have been raised in the North End, where she lived until her death on February 17. It was in the North End that Mary completed high school, then moved on to graduate from Business College in 1942 - quite an accomplishment in those days for a young woman of Ukrainian descent. She worked for many years for Merchants Consolidated before refocusing her efforts towards being a homemaker and mother after meeting Stanley on a North End baseball diamond in the early 1950s. Mary and Stan married on November 20, 1954, and enjoyed 55 years of marriage until Stan’s passing in 2010. A couple years after their wedding they welcomed their daughter Patricia; their son Jeffrey followed a number of years later. Mary spent much of the next few decades providing daily assistance and care to her aging and ailing parents, in addition to looking after her own home and family with vim and vigour. When Mary’s grandchildren arrived many years later, “Grandma Stan” became a loving babysitter. She played many an enthusiastic game of hide and seek (only one of which resulted in a nearly broken hip and a week-long hospital stay), read countless books, and made hundreds of batches of unwaveringly delicious scrambled eggs - an inexplicable delicacy neither of her grandchildren has yet been able to replicate (despite Grandma’s insistence she used “nothing but eggs and milk”). Mary and Stan shared a strong faith in the Ukrainian Catholic Church. They, and both their children, were married at Blessed Virgin Mary Ukrainian Catholic Church, a North End relic that Mary’s father helped to build. Mary remained a parishioner at the time of her passing and enjoyed the spiritual guidance, support and visits she continued to receive from Fr. Volodymyr Bashutsky. An avid news hound and local sports fan, Mary routinely watched the nightly news, read the newspaper from cover to cover, and enjoyed spirited discussions with her family and friends about local affairs and sporting events. Sadly, she lost this pleasure over the last few years as her hearing and vision faltered. Mary also experienced significant physical challenges caused by arthritis as she aged. Yet, she was fiercely determined to remain independent, and lived in her own house until the age of 89. She moved from “home” to Holy Family Towers, where she lived until May 2019 with assistance from her family and home care before transitioning into the adjoining Holy Family Nursing Home. Mary is survived by her daughter Pat Horbal (Russ), son Jeff Dovyak (Rhonda), granddaughter Julie Dooley (Mike), grandson Luke Dovyak (Samantha), and great grandsons Milo and Griffin Dooley. Mary’s family would like to thank Drs. Andrea and Terry Babick and the Holy Family Nursing Home staff for the care provided to Mary over the last nine months. Divine Liturgy will be celebrated at 10:30 a.m. on Friday, February 21 at Blessed Virgin Mary Ukrainian Catholic Church, 965 Boyd Ave. with Fr. Bashutsky officiating. Flowers are graciously declined. Donations can be made to Blessed Virgin Mary Ukrainian Catholic Church or Holy Family Nursing Home. Vichnaya Pamyat – Eternal Memory
Friday
21
February