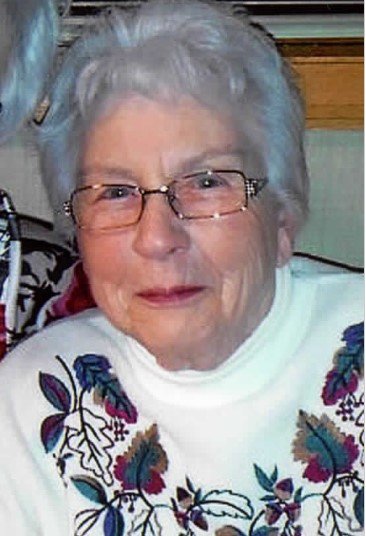 MYRNA (MARY) EWASCHUK March 12, 1928 – February 7, 2020 Myrna was born on March 12, 1928 in Rembrandt, Manitoba where she was raised by two hard working loving parents, Klym and Bella Smikles, with her much loved sisters, Nellie and Anne and brother Steve. Myrna married Stanley in 1945 and moved to the Ewaschuk family farm in Silver where her nurturing and loving mother-in-law, Anastasia, took her under her wing. Tom and Judy were born while on the farm and within a few years the family farm was sold and Stanley and Myrna packed up and moved to Winnipeg with their two children and mother-in-law. Ron was born in Winnipeg in 1950. In 1951 Stanley took sick with double pleurisy so Myrna went to work at Empire Drugs where she enjoyed 27 years of wonderful employment with the Synchych Family, who were like family to her. After Ivan Synchych passed, Myrna went to work at Brothers Pharmacy where she enjoyed a further 15 years of employment with Peter and Myron Kurjewicz, whom she adored and where she met her friend Betty. In addition to being a hard, dependable worker Myrna spent many volunteer hours at Institute Prosvita where she made a host of wonderful friends. At 49 years of age Myrna lost her husband Stanley. Myrna was also predeceased by her youngest son Ron, sisters, Nellie and Anne, and brother Steve. Myrna was a devoted wife, mother, grandmother, aunt and a friend to all whose lives she touched. Myrna leaves behind her son Tom (Linda), daughter Judy, daughter-in-law Denise (Nestor), grandchildren Holly (Cory), Natalie (Joey) and Max (Jennifer), her great grandchildren Syrus, Morley, Solani and Kalan and her nieces (who were also her friends) Carol, Linda, Lena, Elizabeth, Kim and nephews Martin, Larry, John, Wayne and Darren. Myrna’s family would like to extend their appreciation and thanks to the wonderful staff at the Maples Long Term Care Nursing Home for the loving and considerate care she received. Myrna’s Celebration of Life will be held on Thursday, March 12, 2020 at 11:00 a.m. at Cropo Funeral Chapel, 1442 Main Street, Winnipeg. Private family interment to take place at a later date.
Thursday
12
March