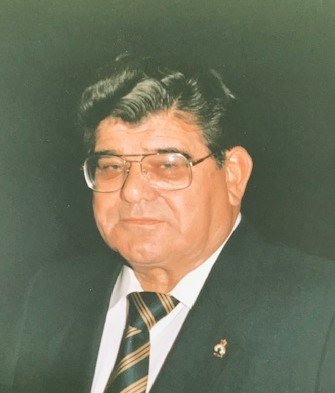 JOE GOYMAN 1923 – 2020 Joe is survived by his wife Erika, son Terry (Sandy), grandson Jim – Joe, his brother Bill (Mary), his sister Mary. He was predeceased by his mother Pauline and father Joseph Goyman and son Brian, his brothers Edward and Stan, sister’s Fran, Ann, Irene and ex-wife Ollie and many nieces and nephews and sister in law Lianne. Joe joined the Navy in 1941 and served until 1945 on three ships; HMCS - Prince Robert, HMCS Stratford and HMCS - Mahone and he came home safe. On his return, he finished high school at the Old Ford building on Portage Avenue and then he spent a year at University of Manitoba. In 1947 he worked at C.N.R. as a Locomotive Engineer until he retired in 1987. After that he helped a few clubs and enjoyed working for them. He was a member of Ashlar Lodge and was P.M.-DDGM Scottish Rite and Khartoum Temple. He was also a member of the Norwood Legion and served on the executive for a few years. Joe also belonged to St. Boniface and Elmhurst Golf Courses. He loved a good discussion and he loved everyone he came in contact with. He will miss them all. Cremation has taken place and a Celebration of Life will be held at New Hope Community Church 214 Henderson Highway on Saturday, February 15, 2020 at 2:00 p.m. If friends so desire in lieu of flowers, donations may be made to Shriners Hospital or a charity of one’s choice.
Saturday
15
February