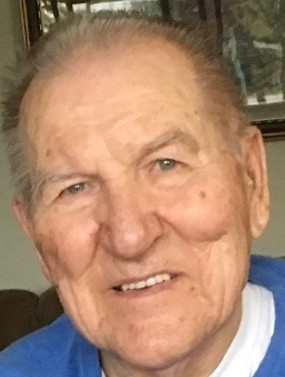 On November 17, 2019 Bill peacefully passed away in his sleep in his 91st year.  He was pre-deceased by his wife Helen with whom he spent 70 wonderful years, and his parents George and Anne Bilows.  Bill is survived by 3 daughters Debbie (Bill), Patricia (Gord) and Diane.  He also leaves grandchildren Melissa, Vanessa, Lyndsay and Lauren as well as 5 great-grandchildren.

Bill was born February 1929 weighing in at 14lbs. Needless to say Bill was an only child and may still hold the record for the heaviest baby born in Sudbury, On. He was raised in Coniston, On. and spoke fondly of his years growing up there.

After high school he attended Business College in Sudbury.  In 1948 Bill began his career with Inco in the warehouse located at the Levack, On. mine.  While in Levack he met Helen Einoff and after a 1 year courtship, they married in 1949.  Levack was home until 1960 when the family moved to the developing town and mine site of Thompson Mb.  He assisted in the set-up of the new warehouse where he later became the Purchasing Agent until his retirement in 1983.

Bill was actively involved in community service during his years in Thompson . This included becoming a member of the Elks Club and playing a major role in the development of the Game and Fish Assoc.  He was a proud member of the Thompson Rotary Club and very active in the services the club provided.  He eventually became a honourary lifetime member.

Bill and Helen had the opportunity to purchase a lot on Setting Lake just south of Thompson.  Together they built a beautiful log cabin which became their summer home after Bill retired.  Winters were spent at their home in Tampa, Florida for over 25 years.

His main interests over the years included skiing, curling, bowling, golf, fishing and his love of the outdoors.

Family was important to him as shown by his devotion to his wife and being actively involved in the lives of his children. He was a wonderful grandfather and great-grandfather.

Bill was a very social person.  He always had a story to tell and conversations often started with ``do you have a minute``?

At Bill`s request, a private graveside service will be held at a later date.  Donations in his memory may be made to your favourite charity.

Share Your Memory of
WILLIAM
Upload Your Memory View All Memories
Be the first to upload a memory!
Share A Memory
Plant a Tree