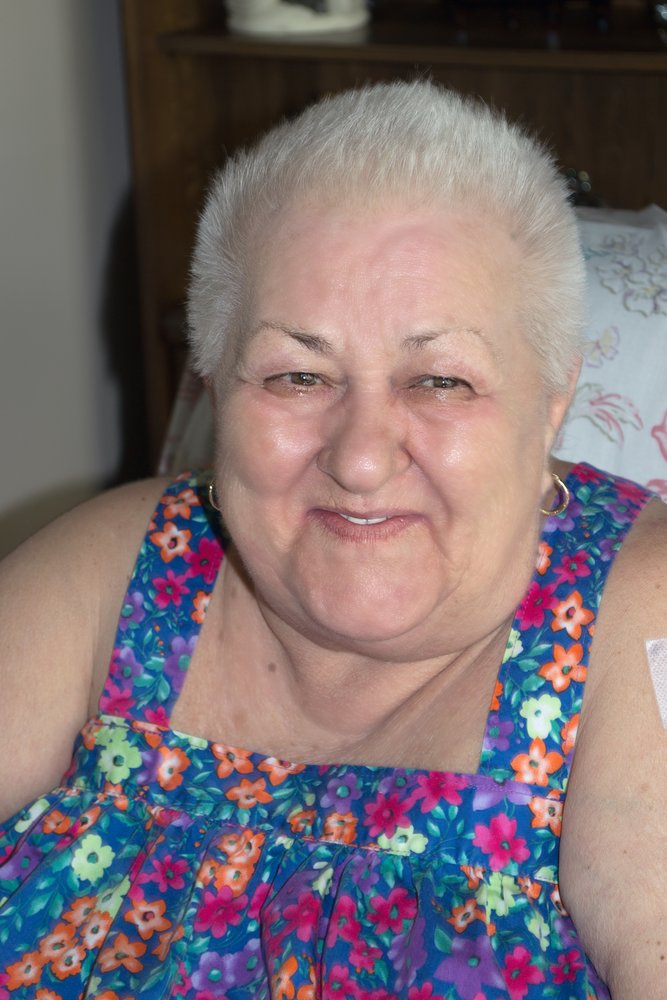 On June 24, 2019 Antonia (Toni) Ruf bravely fought, but lost her battle with lung cancer while in the care of the loving nurses at HSC. Toni had her daughter Elizabeth, Son-in-law Jeff and close family friend, Dawn visit her the morning of her passing.

Toni was diagnosed in March 2018 however because of other medical issues her cancer was inoperable/incurable but chose to live at home with Elizabeth and Jeff up until a week before her passing.

Toni was born in Heilbronn Germany during WW2 on May 26, 1944. The first 6 months of her young life were spent under a grain Elevator (Tower). While living under the grain elevator a bomb was dropped into the grain but did not go off. Even back then there was proof she was meant to do more in life. At the young age of 4, Toni and family fled to Paraguay, South America.

At the age of 7 Toni lost her father. Her mother, now a single mother of 4, ran a family butcher shop in Paraguay where Toni worked until the age of 17. Toni then immigrated to Winnipeg which was made possible because her sister Sonia and family were already living there. When Toni moved to Canada she did so with 1 suitcase, $17 and knowing only 3 words of English. “Richardsons” was huge in giving Toni a start in Canada by giving an opportunity to a young immigrant with little knowledge of English.

At the age of 20 Toni met and fell in love with Bert and they married when Toni was 21. A year later they welcomed baby Bart into the world with baby David a year later in 1967. They bought and fixed up their forever family home on the farm. In 1979 the family home moved from the farm to Brigham Street and in 1980 they welcomed their daughter Elizabeth into the family.

Through the many years of selling Avon Toni met and befriended many of her customers who stayed friends until her passing. Toni was a stellar sales rep. Toni was the top sales rep of her district numerous times, winning multiple “Mrs. Albee Porcelain Dolls” which she cherished until her passing. Many of Toni’s friends (clients) remember fondly of the days that Toni, and usually Elizabeth in tow, would pay them visits talking for hours of business and pleasure.

In 1998, tragedy struck Toni and family as Bert was diagnosed and died from cancer. Tragedy struck the family again as oldest son Bart died of cancer as well in 2010. Toni was able to keep strong for the family after the loss of Bert. After the loss of Bart Toni was just never the same. She stopped singing and whistling, among other things she enjoyed. It was at this point she started to withdraw from both family and friends. Toni enjoyed chatting with Jeff about Bart. Jeff came into the picture after Bart died. Toni use to laugh and cry telling stories of “That Crazy Junior”. It was easy to see how proud she was of Bart and David. Toni enjoyed showing pictures of David with his long hair and guitar. She use to boast of David’s singing abilities and Kung Fu accomplishments, Elizabeth getting her class 1 (semi) and Bart’s athletics.

Toni was a very honest person. She would tell you how it was and didn’t filter her opinion. Toni was a very strong woman who could sit there and yell at you in an argument then turn around and put cream in a coffee cup for a cat because the cat wanted it. She was just a very kind woman. She would and she did do anything for her pets and family. She had the ability to judge people for themselves and not listen to what others had to say. The best trait Toni had was honesty. You do not lie. You tell the truth no matter what and that was not up for debate. She would give you a chance but if you blew that chance you could try for years to get another one and sometimes you just never got it.

Special thanks to Tayo “Jojo” who took care of Toni at home during weekdays in the months leading up to her hospitalization. Also special thanks to the Winnicky Family (Judy, Ivan, Jason, Brittney and Lisa), Eileen Robinson (Jeff's mom) and Dawn Sparks for their continued support throughout Toni’s hospitalization and after her passing. Enough could not be said for the nurses of the GD4 Wing at HSC. They did everything to make sure Toni was comfortable until the end.

Mass of Christian Burial will be celebrated on Saturday, July 6 at 10:00 a.m. at St. Joseph’s Roman Catholic Church, 355 Andrews Street.

In lieu of flowers, donations may be made in Antonia’s memory to the Winnipeg Humane Society.