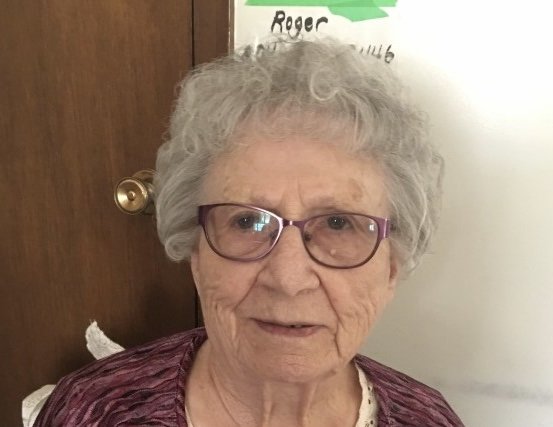 It is with great sadness that we announce the sudden passing of Elsie Buleziuk (nee Ostafichuk) of Winnipeg, Manitoba, with her children by her side, on Saturday, April 6, 2019 at the age of 90 years. She is survived by her loving husband Bill, of 65 years, son Roger (Wendy) and daughter Della (Scott) Hall; grandchildren, Stefani (Keith), Ashley and Kyle (Chelsea), Tyler (Heather) and Riley; sisters, Mary (Richard) Drewniak and Marge (Orest) Fedorchuk; sisters-in-law, Mary O'Staff, Edith O'Staff, Freda Buleziuk and Cynthia Halwas; brothers-in-law, Frank Brewer and Alec Bulbuck, and numerous nieces and nephews. Elsie was predeceased by her parents, Ted and Lena Ostafichuk, her daughter Debbie, and infant daughter Sharon.  Mom was born on May 2, 1928 in Lennard, Manitoba to Lena and Ted Ostafichuk. She was the second child of six children. As the oldest daughter in the family, she had a lot of responsibilities. Mom said from a young girl of six years old, she helped take care of their growing family as there was so much to do living on the farm back in the 1930s. Mom learned from young how important family was. She practiced her caring and nurturing ways all through her life and instilled how to love a family unconditionally in her children and grandchildren. In the mid 1940s, Mom moved to Winnipeg. She worked in Winnipeg at a restaurant called the Okum Inn for a few years. But Mom was not destined to remain in Winnipeg, as Bill Buleziuk was still out on the farm. She had her eyes set on him from a young girl and as soon as he asked her to marry him in 1954 she left Winnipeg behind and headed back to the farm.  Mom and Dad were married on October 10, 1954 in the Ukrainian Greek Orthodox Church in Lennard, Manitoba. They moved into a little house by the valley and not long after into their famous red house on the Ostafichuk homestead. On the farm, Mom raised her three children: Debbie, Roger and Della. In 1969, they made the hard decision to leave the farm and move to Winnipeg.  Mom was an amazing cook and according to Dad no one could make anything as good as her. She was famous for her peroghies, periske, borscht, homemade bread, cheese rolls and stew, just to mention a few. At any point in the day if you had stopped in to visit them you were guaranteed to be sitting down to a meal with them. Her ultimate happiest times were when she was with her grandchildren. She loved to have them sleep over, make peroghies with them, and make Ukrainian Easter Eggs with them. She would always say how fortunate she was to be able to see her own children grow up and then be able to see all her grandchildren grow up into beautiful young adults. Mom was always there for everyone with her caring and compassionate ways, and she will be sadly missed by her family and friends for her love, strength, patience and perseverance. How lucky we are to have had someone so special that makes saying good bye so difficult. Dad will be forever thankful for the beautiful life he had with Mom and will miss her dearly. This obituary may also be viewed online at www.cropo.com

The funeral service will be held Friday, April 12, 2019 at 11:00 a.m. at Cropo Funeral Chapel, 1800 Day Street, Transcona. Interment will follow at Glen Eden Cemetery, 4477 Main Street, West St. Paul. If friends so desire, donations may be made to the Canadian Breast Cancer Foundation or the Ukrainian Orthodox Cathedral of St. Ivan Suchavsky.

Share Your Memory of
ELIZABETH
Upload Your Memory View All Memories
Be the first to upload a memory!