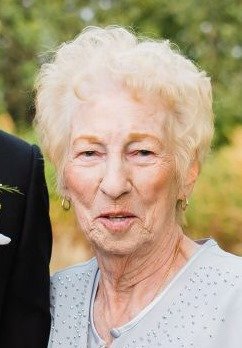 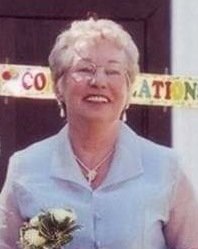 Rose passed away peacefully and quietly in the afternoon of November 3, 2018 at the age of 86 years, in her own bed at The Maples Personal Care Home.

While living in Marystown NL and having 14 children, Rose still found time to serve on committees and was a member of the Catholic Women’s League.  Later on she taught religion classes to the children in Leaf Rapids, and was always active in the church.  She worked at the YWCA, Don Johnson’s Jewellery store and at a medical clinic in Thompson MB.

Rose expressed that her fondest memories were the birth of each of her children and said if she could live her life over she would probably do it all the same again.  She said her greatest inspiration was any time one of her children accomplished something.  Rose was very proud of her children and lived for them.  She was happiest when having a family dinner, first communion celebration, graduation, or a wedding.

She loved to travel and some of her favorite places were Corner Brook NL and Florida USA.

Rose is predeceased by her Mother, two husbands, three children, one grandson and one daughter-in-law.

In accordance with Rose’s wishes, cremation has already taken place.  Her funeral mass and interment will take place early June in Marystown, Newfoundland.

A Memorial Service will be held on December 1, 2018 at 1 pm at Cropo Funeral Chapel, 1442 Main Street in Winnipeg.  Father Dominic Yuen is officiating.  A light lunch will follow.

In lieu of flowers, Rose’s family would like it if you do a random act of kindness for somebody or consider making a donation to a charity of your choice.  They feel that rose would have liked that.

We were very lucky to have had Rose for so many years and will miss her greatly, but know that she is happy with her heavenly family.

Family meant a lot to Rose,

Philip his daughter Laura (Chad) and their daughters Abbigail and Brynlee

Paul his daughter Sandra (Brandon) and his son Greg

Share Your Memory of
ROSE
Upload Your Memory View All Memories
Be the first to upload a memory!