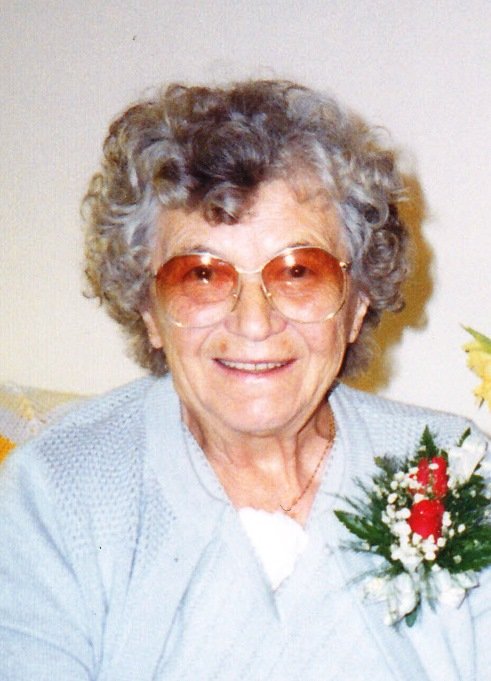 It is with profound sadness that our family announces the passing of Maryna Pyra (nee Geron) on November 7, 2017 at Holy Family Home, aged 100.

Mary was born in Winnipeg on August 26, 1917 to Ukrainian immigrants, Justyn and Anastasia (Zapisocka) Geron. The eldest of five children, she caught the eye of a handsome young man named John Pyra whom she wed on September 2, 1933 at Holy Eucharist Ukrainian Catholic Church in East Kildonan. Together they made their home in South Transcona where they spent 61 years of marriage until John’s passing in 1995. Mary and John had three children together and their home would be the focal point in celebration of their family, friends and community.

With her family, Mary faithfully attended St. Joseph the Worker Roman Catholic Parish and was a member of the Catholic Women’s League. She actively contributed her time and sweets to the many bazaars, bake sales and teas held at the church over the years.  Those lucky enough to sit next to her would be blessed with the sound of her voice singing like the angels above.

Side by side Mary and John worked tirelessly in their immaculate garden, producing many winning entries at the Transcona Horticultural Show.  At harvest, Mary would produce the most delectable jams and preserves. Mary had an extraordinary ability when it came to cooking and baking and her family across Canada looked forward to visiting with her and scoring blueberry tarts, buns and lemon meringue pies.

Mary was also an incredibly talented artist, having perfected skills in needlepoint, knitting, crochet, tatting, and sewing.  Her family and home were lovingly adorned with her crafts, and when her son moved north to teach, she would ship socks and sweaters to him and his colleagues to keep them warm through the winter months.

Shown in every aspect of her life, Mary’s greatest joy was having her family around her.  Her heart was full of love and pride for her family and her home always bustled with activity. She loved hosting family gatherings, preparing delicious Ukrainian meals and spoiling her children, grandchildren, nieces and nephews with scrumptious treats.  Annually Mary and John would visit their daughter and grandchildren in North Vancouver, escaping the Winnipeg cold only to be greeted by the west coast rain during the month of November, leaving the freezer full and cherished blankets repaired until the next visit. Mary and John would then jet away to Mazatlan, Mexico for some well-deserved warmth and relaxation together with their friends.

The family would like to extend sincere thanks to Drs. Taras and Andrea Babick whom provided loving and compassionate care. The family also wishes to extend their gratitude to the staff at Holy Family Home for their kind and patient care of Mary over the last 14 years. In lieu of flowers, those wishing to express condolences may do so by donating in Mary’s memory to Holy Family Home or a charity of their choice.

Share Your Memory of
MARY
Upload Your Memory View All Memories
Be the first to upload a memory!