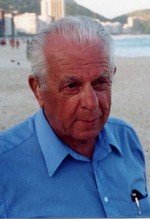 ZENON YAKYMYSHYN Sadly we announce the passing of Zenon Yakymyshyn on July 9, 2008 after a brave struggle with cancer. Zenon is survived by daughters Lynn (Darryl) and Sonia (Joerg); brothers-in-law George (Ruby) and John (Margaret); nieces and nephews in Canada and the Ukraine. He was predeceased by his wife Mary (nee Debiuk); mother Anna; father Volodymyr; only brother Volodymyr and nephew Zenon. Zenon was born in Pobich, Ukraine on December 18, 1922. He learned tailoring in Ukraine and had further training in Vienna, Austria. Zenon came to Canada in 1948 and settled in Winnipeg where he met his wife Mary. Zenon started his own business, Cravats Tailors in 1951. He worked hard at his business, at times 100 hours per week. He operated his business for 54 years before retiring in November 2005. Zenon had a gift for languages and knew how to speak 7 languages. He would hire new immigrants and take an interest in learning their language. In his 50's he started travelling to Mexico and Cuba where he started learning the Spanish language. The locals in these countries would always comment on his perfect pronunciation. Zenon had a passion for his homeland Ukraine and visited there many times. He brought his wife and daughters with him on one of these trips to tour the country and meet his relatives. In his retirement years he kept up with current events in Ukraine by spending many hours on the Internet. Zenon had a love of travel and travelled with family and friends all over the world, throughout Europe, India, Indonesia, China, Thailand, Australia, New Zealand, Tahiti, Fiji, Central and South America, Jerusalem and Egypt to name a few. He had a special love of Puerto Vallarta and last travelled there this year in January. Zenon's patient loving and gentle nature was evident all his life. He was an excellent father to his children and supported them in many ways. He was caring and loyal to his family in the Ukraine and friends here, helping them in times of need. Our family wishes to express a special thanks to the staff at Seven Oaks Hospital for their compassionate care of Zenon. Prayers will be said on Sunday, July 13 at 7:00 p.m. at Cropo Funeral Chapel, 1442 Main Street. Funeral Service will be held on Monday, July 14 at 9:30 a.m. at Ukrainian Orthodox Metropolitan Cathedral of the Holy Trinity, 1175 Main Street. Interment to follow in Glen Eden Memorial Gardens. An online book of condolences may be signed at www.cropo.com. In lieu of flowers, donations may be made in Zenon's memory to the Ukrainian Orthodox Metropolitan Cathedral of the Holy Trinity, 1175 Main Street, Winnipeg MB R2W 3S4 or a charity of your choice.
Share Your Memory of
Zenon
Upload Your Memory View All Memories
Be the first to upload a memory!