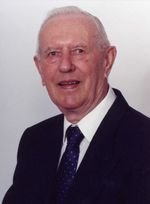 PETER TESARSKI It is with great sorrow that the family announces the passing of Peter Alexander Tesarski at the Concordia Hospital on Thursday, May 15, 2008 after a battle with cancer. Peter passed away at the age of 83. Left to cherish his memory are his loving and devoted wife of 60 years, Mary, daughter Valerie (Rolf), and son Phillip (Anne). Peter treasured time spent with his grandchildren, Christopher, Sean, Michael, Monica, Nancy (Steve) and Eric. In his passing, Peter will be reunited with his son Leonard; father Alexander; mother Mary; brothers John, Steve, Martin, Frank and his sister Helen. Dad left home at the age of 12 after his father passed away to help to support his mother and siblings at the cost of his own dreams to pursue his education. Family, respect, hard work, education, honour, and trust were important values to our father. He spent his life caring and providing for his family. Dad was proud of his children, his grandchildren and their many accomplishments. Among his favourite activities were tending to his garden, playing cards, sharing stories, and singing. During his life he was a devoted member of St. Nicholas Ukrainian Catholic Church. Dad was employed as an Overhead Crane Operator at the CNR Transcona Shops where he retired after 38 years of service. Our family would like to thank Dr Johnson and the wonderful staff on 3W at the Concordia Hospital for their care and compassion to our father. We would also like to thank our friends and family for their support. Prayers will be said on Monday, May 19 at 7:00 p.m. at St. Nicholas Ukrainian Catholic Church, 737 Bannerman Avenue. Divine Liturgy and Funeral Service will be celebrated on Tuesday, May 20 at 11:00 a.m. also at the Church with a Basilian Father as Celebrant. Interment to follow in Holy Family Cemetery. An online book of condolences may be signed at www.cropo.com. In lieu of flowers, donations may be made in Peter's memory to the St. Nicholas Parish for the Church Improvement Fund, by mail to St. Nicholas Ukrainian Catholic Church, 737 Bannerman Avenue, Winnipeg MB R2X 1J9 or in person at the Church. VICHNAYA PAM'YAT Rest in Peace

Share Your Memory of
Peter
Upload Your Memory View All Memories
Be the first to upload a memory!
Share A Memory
Send Flowers