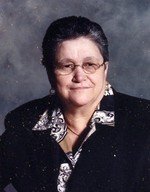 ARMENIA MARIA SOARES TAVARES January 2, 1933 - August 13, 2008 It is with great sadness that our family announces the passing of our beloved mother sister, grandmother, aunt and friend on Wednesday, August 13, 2008 at Riverview Health Centre at the age of 75 after a short fight with cancer. Armenia will be lovingly remembered by her daughter Filomena Sousa (Jose Maria predeceased), son Luis (Paula) and daughter-in-law Dulcina (husband Emanuel predeceased); as well as her grandchildren John, Jamie, Brian, Helina, Carlos and Teren; great grandchildren, nieces and nephews. Armenia is also survived by her brother Carlos Soares (Rosa) and Carmelia DaSilva (Luis) Providence, Rhode Island. Armenia was predeceased by her devoted and loving husband of 24 years. Carlos Daniel Tavares in December 21, 1979, her son Emanuel Tavares 1995 and her son-in-law Jose Maria Sousa 1996. She was born in Ponta Delgada, S. Miguel, Acores, Portugal. She immigrated to Canada in January 28, 1970. Our mother worked hard as a seamstress for Tan-Jay (Nygard) for many years to make Canada our home. She would think of herself last and give the shirt off her back and want nothing in return. She was loved by co-workers, family and friends. She retired in 1993 to spend more time with her family. The one thing that none of us will forget was her faith, spunk and the way she would tell stories of the past. Mom you will truly be missed but never forgotten by those who knew you. The family would like to thank the staff at the Riverview Health Centre for making our mother's last days as comfortable as possible. Prayers will be said on Friday, August 15 at 8:00 p.m. at Immaculate Conception Roman Catholic Church, 181 Austin Street N. Mass of Christian Burial will be celebrated on Saturday, August 16 at 10:00 a.m. also at the Church with Very Rev. Josï¿½ Eduardo Medeiros, V.F. as Celebrant. Interment to follow in Assumption Cemetery. An online book of condolences may be signed at www.cropo.com. In lieu of flowers, donations may be made in Armenia's memory to CancerCare Manitoba. Cropo Funeral Chapel 586-8044
Share Your Memory of
Armenia
Upload Your Memory View All Memories
Be the first to upload a memory!