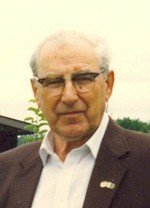 JOHN PETER SEMKIW It is with deep sadness the family announces the passing of John Semkiw on Wednesday, August 13, 2008 at Seven Oaks Hospital. John was born in Galicia, Ukraine on September 27, 1909. He had immigrated to Canada in 1914 along with his parents and two brothers Anthony and Peter. The family had settled as pioneers in Meleb, Manitoba. John had married his wife Kay (nee Kolody) and was married for 67 years before Kay passed on. John had purchased and operated the Russell Hotel from 1949 - 1952. When John and Kay lived in Toronto they owned and operated a Fish &amp; Chip store and a Grocery store. John had also worked as a carpenter till he retired in 1973. John and Kay moved back to Winnipeg in 1975 where they retired. John was predeceased by his wife Kay in February 2002, parents Peter and Patricia (nee Zaborowsky), brothers Anthony, Peter and sister Helen Rosolowich. He is survived by brothers Carl and Tony (sister-in-law Rose) and sisters-in-law Jean Ciastko and Olga Iwaniuk and many nieces and nephews. Funeral Service will be held on Saturday, August 16 at 10:00 a.m. at Cropo Funeral Chapel, 1442 Main St. with Rev. Fr. Peter Chorney officiating. Interment will follow in Glen Eden Memorial Gardens. In lieu of flowers, donations may be made in John's memory to a charity of one's choice. CROPO FUNERAL CHAPEL 586-8044
Share Your Memory of
John
Upload Your Memory View All Memories
Be the first to upload a memory!