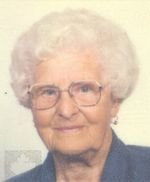 Irene Sawiuk 1910- 2008 With profound and overwhelming sorrow we regretfully acknowledge the death on May 24, 2008, of our mother, Irene Sawiuk at Seven Oaks Hospital following a brief illness. Irene passed away 78 years to the day she and her newly-wed husband, Peter Sawiuk, arrived in Canada from Poland(Ukraine). It was the beginning of a new life of farming in the Plumas, Arden and McCreary area of Manitoba. They retired to Neepawa in 1970 before joining their daughter, Elsie, in Winnipeg. Our mother was born of the soil of Ukraine(Zeemno, a small village near Vladimir Volynsk), on May 10, 1910, to Cenifon and Anna Matviyuk. Her first of several visits back to Ukraine was in 1966 - the last in 1997. Irene has been cremated so will now become part of the Canadian soil from which she and Peter earned their daily bread for more than 40 years. Peter died in Winnipeg on June 14, 1993. Irene was also predeceased by her parents as well as her sisters, Marysia and Christina; brothers Fedor and Trohem, in Ukraine; and brother, Teehon, in Argentina; son, William, and grandsons, Donald and David Williston, in Manitoba. In addition to her daughter, Elsie (Floyd) Williston in Winnipeg, she is survived by a number of relatives in Ukraine and the USA to whom she has extended considerable support throughout her years in Canada. Our mother had only a few months of formal education but loved to read - primarily in Ukrainian. She was a good conversationalist( in both Ukrainian and English) and maintained a keen interest in world affairs. Irene was a &quot;people-person,&quot; who enjoyed being surrounded by young and old alike. Recently she was a resident of Ivan Franko Manor, frequently attending the cultural events at the Ukrainian Labour Temple nearby. She was generous to a fault and always a kind, welcoming host. A memorial service will be held at 12.00 p.m.(noon), Thursday, May 29, 2008, at Cropo Funeral Chapel, 1442 Main Street. In lieu of flowers, donations may be made to the Williston Brothers Memorial Fund(Kent Road School, Winnipeg, MB); Ukrainian Canadian Herald(c/o 595 Pritchard Ave., Winnipeg), the Heart and Stroke Foundation, or a charity of your choosing. We humbly express our sincere appreciation to the staff at Seven Oaks Hospital for their kind and unselfish attention to our ever-young mother in her final days. Our heartfelt thanks also to Dr. Marilyn Singer for her many years of dedicated care and devotion to Mom. Sleep peacefully dear mother, Irene. We miss you already and we will &quot;see you in our dreams&quot; CROPO FUNERAL CHAPEL 586-8044

Share Your Memory of
Irene
Upload Your Memory View All Memories
Be the first to upload a memory!
Share A Memory
Send Flowers