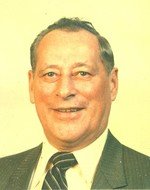 MYRON (KONGO) RAKOWSKI Peacefully on July 10, 2008, Myron passed away at St. Boniface Hospital at the age of 84. Myron was predeceased by wife Ann; brothers John, Harry, Joe and sister Stephie. He is survived by his sister Olivia (Bill) Williams; brother Dennis (Claire) and numerous nephews and nieces, also by his stepdaughters Lucy Miller, Doris Walkely and Ollie Bilton. Myron was born in Winnipeg on May 19, 1924 and attended Kind Edward and Isaac Newton Schools, graduating in 1941. He was employed at City of Winnipeg for 40 years, retiring in 1988. He was also proprietor of the Olympic Shoe Shine Parlor for many years, where he made many friends. He also enjoyed golfing, bowling, extensive travelling and was a member of the South Osborne Legion #232. He was a humble and generous man. Ash interment will take place on Wednesday, July 16 at 1:00 p.m. at Brookside Cemetery. Flowers gratefully declined, if friends so desire, donations may be made in Myron's memory to CancerCare Manitoba.
Share Your Memory of
Myron
Upload Your Memory View All Memories
Be the first to upload a memory!