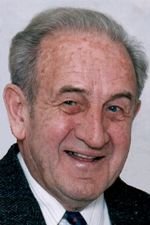 Bronislaw (Bruno) Ozog May 7, 1926 - April 29, 2008 Peacefully, after a long struggle, Bruno passed away April 29, 2008 at the age of 81. He endured his condition of Progressive Supranuclear Palsy with courage and stoicism. Bruno leaves behind his sister Helen Gabriel, his devoted wife Leona, his sons Victor and Greg, daughter in law Anita, and grandchildren Stefan and Sabina. Bruno was born on May 7, 1926 in the village of Sokolow, Poland to Walter and Aniela Ozog. In 1937, the family immigrated to Canada and took up residence in Winnipeg's north end, where Bruno attended Victory School. In the summer of 1939 Bruno returned to Sokolow with his mother and sister for a temporary stay, only to remain in Poland for the duration of the Second World War. Eventually, after the war ended, he returned to Winnipeg and completed high school at night while working at odd jobs during the day. As a young man in Winnipeg he joined the Polish Sokol folk choir, of which he remained a cherished and valued member for the rest of his active days. It was as a member of the choir that he expressed his love of music and met Leokadia Chojno, whom he married in 1953. He later obtained career employment as a technician with Manitoba Hydro. After he lost his first wife to cancer, he remarried in 1983 to Leona Turek. Throughout his life and with renewed vigour in retirement, Bruno pursued his twin passions of travel and music. Bruno had a natural ear for music and as a singer he enjoyed nearly everything from Polish folk song, opera and the classics to African drumming, jazz vocals and Broadway musical. He traveled as broadly as he listened to music, going on high altitude treks in the Himalayas, the Andes and the Alps and visiting China, Morocco, Thailand, Australia and numerous countries and resorts in Europe and the Caribbean. The family would like to thank Dr. Walli at the Winnipeg Clinic for his devoted care and the Seven Oaks General Hospital doctors and health care staff for their care and support during Bruno's last days. They would like to thank Ken, Guy, Mike, Mark, and Moises, the home care staff who made it possible for Bruno to remain at home. A funeral service will be held on Thursday, May 1, 2008 at 11:00 a.m. at Holy Ghost Roman Catholic Church, 341 Selkirk Ave. with interment to follow in Holy Ghost Cemetery. An online book of condolences may be signed at www.cropo.com. In lieu of flowers, contributions may be made in Bruno's memory to the Movement Centre of Manitoba, 1646 Henderson Highway, in Winnipeg, and St. Benedict's Foundation, 225 Masters Avenue, in Winnipeg.
Share Your Memory of
Bronislaw
Upload Your Memory View All Memories
Be the first to upload a memory!