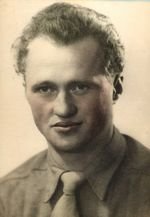 FRANCISZEK (FRANK) MROZEK Frank passed away, peacefully in his sleep, at Seven Oaks Hospital on April 18, 2008. During his final days he was in the continuing company of family and friends. Frank leaves behind to mourn him; his loving wife Stella; daughter Teresa with her daughters Odessa and granddaughter Maija; Candice (Derek); son George; daughter Elizabeth (Eric) with their children Kaitlyn and Alex; son Julian (Teresa) with their children Jessica, Matthew and Joshua; many loving friends and extended family. Frank was born in Schrewenborn, Germany on April 16, 1919. His parents returned to their home parish of Walichnowy in Poland when he was 3 months old. This was where he spent his childhood years with his parents and five siblings. He resided in Wales and England after WW2 when he moved with his wife and two young children to Winnipeg in 1956. He was a hardworking, friendly, gentle, kind person who valued his family and his God far above any materialistic gains. Mass of Christian Burial will be celebrated on Tuesday, April 22 at 10:00 a.m. at Holy Ghost Roman Catholic Church, 341 Selkirk Avenue with visitation one half hour prior. Interment to follow in Holy Ghost Cemetery. In lieu of flowers, donations may be made in Frank's memory to a charity of your choice or to Holy Ghost Roman Catholic Church. &quot;Wieczny odpoczynek racz mu dac Panie.&quot;

Share Your Memory of
Franciszek
Upload Your Memory View All Memories
Be the first to upload a memory!
Share A Memory
Send Flowers