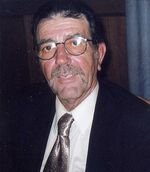 JOSï¿½ A. MONIZ On June 22, 1945, Josï¿½ A. Moniz was born in Saï¿½ Miguel, Aï¿½ores. Josï¿½ started work with the Canadian National Railway in 1964 at Fort Qu'Appelle, Saskatchewan and was to be on the road in many locations until 1968. He then transferred to the diesel shop at Symington Yards where he stayed until 1977. Josï¿½ quit the railway and worked the construction trades for the City of Winnipeg until 1981. He returned to C.N.R. as a laborer, then trained for four years to become a welder, which became his profession. Josï¿½ leaves behind his most cherished treasure and only love, Maria Teresa, his beloved sons Robert (Tanya) and Michael (Mellissa), his newest joy and first grandson Blaze Eugene Josï¿½ Moniz. Josï¿½ also leaves behind brothers Manuel (Maria Clara), Mariano (Stephie), and sister Senhï¿½rinha (Josï¿½ Guida), brother-in-law Joï¿½o Bernardo (Maria dos Ramos), numerous nephews, nieces, cousins and friends. The family would like to thank the doctors and staff with CancerCare Manitoba, St. Boniface Hospital, Health Sciences Centre, the Palliative Care Program and a special thank you to Dr. Nick Van Rensberg of Beausejour Hospital for the never-ending support. Prayers will be said on Friday, May 23, 2008 at 7:00 p.m. at Cropo Funeral Chapel, 1442 Main Street. Funeral Service will be held on Saturday, May 24 at 10:00 a.m. at St. Michael's Parish in Cooks Creek, MB. An online book of condolences may be signed at www.cropo.com. Father, you are the rock on which our family was built. We will never forget your kindness, sense of humour and your giving nature. May God bless and keep you until we meet again. In lieu of flowers, donations may be made to CancerCare Manitoba.

Share Your Memory of
JosÃƒÂ©
Upload Your Memory View All Memories
Be the first to upload a memory!
Share A Memory
Send Flowers